Two bouts remained in Sunday’s matchup of top-ranked Hartland and No. 2 Davison at Central Michigan University’s McGuirk Arena in what could've been a possible preview of next month’s MHSAA Division 1 championship match. The Eagles trailed by 11 points, and Castillo faced the day’s pivotal moment – and seized it to key his team’s 27-26 win and earn this week’s Michigan National Guard “Performance of the Week.”

Castillo, ranked No. 3 in Division 1 at 152 pounds by Michigan Grappler, earned a hard-fought pin over No. 6-ranked Kurt Schlack, setting up teammate Logan Vish to score the match-clinching pin in the final bout at 160. The team victory was the 650th of coach Todd Cheney’s career since taking over the program in 1991-92 and moved the Eagles to 17-1 after they’d lost their first match this season earlier in the morning to Detroit Catholic Central.

Castillo, 24-0 this winter, is a four-year starter for Hartland and holds a 167-35 career record. He was an MHSAA Individual Finals qualifier last season at 135 pounds and a key contributor as the Eagles finished runner-up as a team in Division 1, falling to Brighton 31-25 in the championship match. He also finished fifth at 125 pounds at the Individual Finals as a sophomore and qualified at 112 pounds as a freshman. He’s still deciding college plans, but holds a 3.3 grade-point average and is considering a career in the medical field.

Coach Todd Cheney said: “Sage is an extremely hard-working kid and a great leader. Sage had a 4-0 week recording three pins and a major decision, and he helped start our comeback pinning a ranked wrestler from Davison.”

Performance Point: “When my friend Reese (Hughes), right after he won, (I thought) we have a chance to win this. Our next wrestler … he ends up losing (at 145), so we’re down by 11, and then I’m like, ‘OK, we have to pin the next two kids or we lose.’ Schlack is a great wrestler; he’s strong, he’s agile. But I went out, and I knew I was not going to lose. I wrestled my heart out, and I ended up pinning him. I had so much going through my mind. When I got in my first shot, it was like, ‘Wow, that wasn’t really that bad. (But) if I’d gotten into a scramble with him, there was a chance he’d catch me. … I got him into a cross-face cradle, and it was just so tight. There was so much energy and strength going through me, there was no way he was going to break it.”

Comeback kids: Hartland opened Sunday with its first loss of the season, 33-16 to No. 3 Detroit Catholic Central. “We went in way overconfident. We thought we’d never lose. With that mentality, we didn’t take it too seriously, and that’s what cost us the match. We lost the first five or six matches right in a row and couldn’t bounce back from that. Taking that, and going into the Davison match, that fueled the fire. Our loss helped us bounce back from it and wrestle hard.” 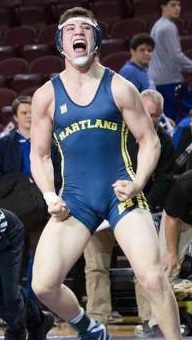 Title dreams: In addition to finishing runner-up last season, Hartland also finished runner-up in Division 1 four straight seasons from 2004-07. “It would mean the world to me, being the first team to win a state title at Hartland. It would be the most amazing feeling in the world. To have Cheney hand me the trophy in the center of the mat at Central Michigan … to make my school proud and my family proud, I’ve dreamed about it numerous times. Cheney’s talked to me about it. He’s sort of talked about this year, the overview of it, talked about how tough of a season we have this year. He’s scheduled tough tournaments, not for us to lose, but to get ourselves better. If we do lose, it gives us room for improvement.”

Learning from a legend: “It’s been pretty awesome; I’m not going to lie. I love wrestling for Cheney. He’s a great coach, and he knows what he’s doing. Cheney’s taught me how to respect others in my match, in other matches, my family; he’s taught me a lot about respect over the last four years."

Next level and beyond: “I’m mostly leaning toward nursing (and) I want to wrestle. Just working with people, getting to know other people, helping out others. (Science) is what I excel in, mostly. It just interests me the most – figuring out how things work in the body, nature, and all of that stuff.”

PHOTOS: (Top) Hartland's Sage Castillo attempts to finish a pin as the official leans in to make the call. (Middle) Castillo celebrates his victory during Sunday's match against Davison. (Top photo by Danna Castillo; bottom photo courtesy of Todd Cheney.)