The fourth-year varsity setter had 35 assists – including the 4,000th of her high school career – to lead the No. 2-ranked Eagles past No. 9 Grand Haven 3-1 in a matchup of top Division 1 teams, earning the MHSAA “Performance of the Week.” Maat became the 12th Michigan athlete to surpass that 4,000 milestone, and with 4,183 she’s up to seventh in state history for career assists since the introduction of rally scoring during the 2004-05 season.

Maat is averaging 7.6 assists per game this season and also has 22 aces for a Hudsonville team that is 36-2 as it pursues its first MHSAA championship in this sport. Two days before the Grand Haven match, Maat and the Eagles got past Division 2 top-ranked Grand Rapids Christian 3-2 to avenge its most recent of two defeats this fall. (Hudsonville also has twice avenged its first loss of this season, to Division 1 No. 3 Lowell). In addition to joining the varsity lineup as a freshman, Maat is a three-time team captain and earned all-state honorable mention last season to go with a number of other accolades during her career.

After growing up playing softball as well, Maat turned her full athletic attention to volleyball in high school and has helped the Eagles to District titles the last two seasons. She also carries a 3.3 grade-point average and will continue her academic and athletic careers at Ferris State University, where she plans to study sports communications in pursuit of a career in event planning for a sports franchise or athletic program.

Coach Teresa VanDerSchaaf said: “It has been a true honor to coach Kaylee over the last four years. She has developed into such an amazing leader that genuinely cares for her teammates and their success. She shares credit with her team and loves watching them succeed. Kaylee has time and time again stepped up in big matches as well as stepped up in leadership roles. She handles pressure situations really well. We place a lot of ownership on our captains, and for Kaylee to rise to that opportunity and care about her development, as well as her team’s, is something that is so amazing to see.”

Performance Point: “I've put a lot of work in. But my team gives so much back to me, whether it be feedback or great passes; it comes mostly from them,” Maat said. “I had kind of an idea (I was close to 4,000). Some of my favorite teachers were chirping about it, but I didn't know exactly where I was at. I think it's a milestone. … It's something I've been striving for for a while.” 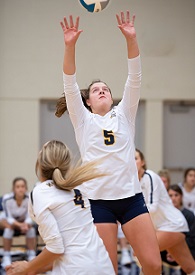 A better way: “When I was a freshman, I was kind of a hot head. … That comes from just being super passionate about what I do. I want to win in everything that I do in life, whether it's in school – like I want to beat someone else out for a better grade – I'm always competitive about everything, and that's kinda where that came from. But it's directed in a better way now that I've grown up. Learning not everyone responds well to someone jumping in their shoes about something – through the coaches, through Hudsonville, I've learned that.”

Learning to lead: “When I was a sophomore, we went through a leadership book, all the different keys of leadership, and I think I really bought into that and every aspect of it. My sophomore year, I really grew that year because of going through that with my coaches and the other captains. … At the beginning of the year, it’s always a little rocky getting to know the new girls and talking about seeing how people respond to different things – that’s always something to learn. Always giving other people what they want is my top priority.”

More than a game: “I've gained so many friendships through (volleyball). Like yeah, we all love the game, but the relationships you gain through it is what I feel keeps everyone together and supporting each other. That's what I love – the game brings so many people together. Through high school, in my community, and other high schools, and during club I've met a lot of girls from different states. They're people that are exactly like me and love what they do every day.

Creative outlet: “I've always been super-organized – that's my thing – and creating stuff. I've always been into crafts, like when I was a kid I was always making something with my dad outside or in the kitchen with my mom or doing something fun with papers and crafts with my grandma. In my free time, I do a lot of journaling. … Writing all this stuff down in a creative way helps me process all of this stuff.”

PHOTOS: (Top) Hudsonville setter Kaylee Maat (5) celebrates with her teammates. (Middle) Maat, in her fourth season starting for the Eagles' varsity, sets for one her team's hitters. (Photos by Robert McCulfor Photography.)