Krzywiecki appears in the MHSAA softball record book eight times – and that doesn’t include the incredible numbers she’s putting up again in this, her final high school season. This spring she’s hitting .464 with eight home runs and 38 RBI in 17 games – and she had the winning hits in both games of Friday's 2-1, 5-2 sweep of reigning Division 1 champion Warren Regina to earn the Michigan National Guard Performance of the Week.

The senior first baseman dropped a bloop single to drive home the winning run in the sixth inning of the first game, then drilled an opposite-field three-run homer in the first inning of the second to lead the No. 2-ranked Marlins, who now sit 16-1 this season after advancing to the Division 1 Semifinals a year ago. Regina had beaten Mercy in three straight games, but the Marlins now have control in the Detroit Catholic League Central race.

Krzywiecki’s 36 career home runs in 109 games over the last four seasons rank seventh on the MHSAA career list, and she should climb at least a few more spots as she pursues the record of 49. She ranks 13th currently with 182 RBI and has a .497 career batting average, and she’s also 43-5 pitching over her varsity career. Krzywiecki committed to play collegiately at South Alabama as a sophomore and is interested in studying business.

Coach Alec Lesko said: “As a senior and four-year starter, Abby has become a tremendous leader. Both on and off the field, Abby has shown character that helps make everyone around her better. Recently, off the field, Abby was walking the halls of Mercy High School and saw a teammate underclassmen all stressed out. Of course, Abby asked, ‘What was wrong?’ Apparently this young lady was having a tough time with a big assignment. Abby immediately stopped what she was doing and helped find the right resources and people, other teammates, to assist this fellow student to understand and complete this assignment. When I heard of this, I was by no means surprised. Abby does this all the time on the field! She has a calming effect with the team, (and) she helps younger players at practice as well as games. She is perhaps the biggest cheerleader in encouraging everyone all the time. Abby's own work ethic and dedication to her softball life is evident during games. Her stats speak for themselves. Abby is getting an incredible amount of attention this season with awards, scholarship opportunities, and top player awards and people to watch. This could be a difficult distraction to deal with, and Abby has taken it all in stride. … Abby, along with our other two senior captains, are bringing this team closer together.”

Performance Point: “I had a day when I was off (April 26 against Livonia Ladywood), so I went home and worked harder than I had in a while. I knew Regina would be a roadblock, so I worked hard to be the best player I could be not for myself but for my team. It’s not about getting my stats higher, but getting base runners in position to score for the team. I thought more about placing the ball, not hitting it as far as I can but as hard as I can. I’ve learned to not swing for the fences; if you swing hard enough with a perfect swing, it’s going to out, and I’m getting better at that mentality.”

Work pays: “To be able to see the results of my hard work paying off is pretty incredible. To know the feeling that I wasn’t wasting my time, that if I had to miss a social event, go to practice or a tournament … the numbers like the records I’ve achieved, wow – look what I can do if I set my mind to something. It blows me away how well I did just because of the support of my team, my family and my coaches, and I’m working harder than ever. It’s reassuring to know if you work really hard at something you love – softball is one of the priorities in my life – to know that if you have to miss out on things, it comes out to be the best thing for you. I’ve noticed that throughout high school.”

Sounding off: Krzywiecki’s teammates often catch her making a clicking sound with her mouth – she mentally prepares by trying to imitate the sound of the ball coming off her bat. “When I’m walking up there, you can hear me or I might do it before game one (of a doubleheader). If I’m struggling, you can see me doing it a couple of times; I’m trying to get the sound of the bat perfectly; especially with my bat, I can tell when I hit it perfectly. A lot of these girls are my best friends, and they know if I’m making that clicking noise, they let it go.” 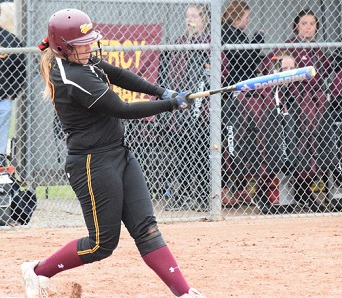 Unfinished business: “We’re just super excited about how much potential we have. We have a lot of talent, but we have even more chemistry and teamwork and positivity. We have a great attitude, and when you have great human beings surrounding you, you’re excited to keep pushing forward to see how good you can get. It’s unrealistic to think we’ll win every single game, especially in an unpredictable sport like this, but it will be fun to see how far we get together.”

Passport ready: “I’m thinking business (at South Alabama), but I’m really into the entertainment industry. So I’m interested in working at Universal (Studios), behind the scenes there, or in international business because I like to travel. I’ve been to over half the states, I went to Paris when I was younger, obviously Canada, Hawaii twice, and Boulder, Colorado, which is my favorite place in the world. And my family is planning a trip to Italy in two summers for my parents’ anniversary. I’m comfortable being uncomfortable … so I just love to travel.”

PHOTOS: (Top) Farmington Hills Mercy's Abby Krzywiecki is greeted at home plate by her teammates after a home run. (Middle) Krzywiecki powers through another swing. (Photos courtesy of the Mercy athletic department and Krzywiecki family.)