The all-state ace struck out the first nine batters she faced and was nearly unhittable as Division 3’s top-ranked Cardinals opened the Escanaba Invitational on May 10 with a 3-0 win over the Eskymos, the reigning MHSAA Division 2 champion. Sherman – who also led her team to a win at Escanaba in 2018 – gave up one hit, didn’t walk a batter and struck out 15 to earn the Michigan Army National Guard “Performance of the Week.”

The team’s fulltime starting pitcher the last three seasons, Sherman helped the Cardinals to last year’s Division 3 championship game, a 7-6 defeat to Coloma. She is one of a large and accomplished group of four-year seniors who have led the varsity to four straight league, three District and three Regional championships – the 2016 District title was a program first, and the league crown that spring was the first since 1978. Millington is 23-2 this season and a combined 62-5 over the last two – with all five losses coming by just a run.

Sherman, an all-state first-teamer last season who also earned honorable mention as a sophomore, is 11-2 this spring with a 1.17 ERA and 130 strikeouts in only 72 innings pitched. She’s also hitting .529 with five home runs and 38 RBI. For her career, Sherman is 77-11 pitching with a 1.15 ERA and 780 strikeouts over 493 innings pitched, and has hit .453 with 19 home runs and 185 RBI. Her career batting average and RBI qualify for the MHSAA record book, and she needs just one more home run to also make that all-time list. Sherman has signed to continue her career at Kent State University, where she’ll follow in her mother’s footsteps and study nursing – Gabbie carries a GPA above 4.0 and ranks seventh in her Millington graduating class.

Coach Greg Hudie said: “When her and her freshman classmates came in, they made an immediate impact. With a pitcher, they’re a little bit more sensitive sometimes mentally, and she was able to grow at her own pace with all-stater Taylor Wright taking a little bit of the heat off and teaching her the ropes. And I think that had a huge part in Gabbie's success, just seeing how it's done. She's taken the reins and definitely made her own mold here at Millington and is leaving some big steps to walk in for sure. …  When you’ve got somebody like Gabbie, you'll play the world – and you always think you've got a chance.”

Performance Point: “It was a different type of atmosphere during that game,” Sherman said of the Escanaba matchup. “It felt like playoffs, that type of intensity. They put their (2018 championship) banner up right before they were playing us, and so it just made me want the game more. … Striking out the first nine batters was kinda huge. And me and Sydney (Bishop, her all-state catcher) had a really great game going; she knew what I wanted to throw and we were both locked in. To beat them this year ... just showed we are one of the best teams and that we can play with the best teams out there.”

One team, one goal: “This year for me has just been about getting back (to the Finals) and just winning it. Last year being so close made all of us want it more. So all of us, for the goal in mind, has been to win the championship. I know that's everyone's goal – everyone's like, ‘Let's go to states and win it’ – but for us it's different because we've been there, we've put in all the hard work, we’ve put in all the extra time, so we can make it happen for ourselves.” 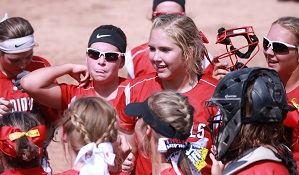 Learning to finish it: “I think my mental game is a lot better this year. I can bounce back from things better than last year. The Clarkston game, when I gave up a grand slam, I had to bat next time up, and I didn't just give up. Last year that would happen, and I would take that with me. This year I can set it aside and I can go to the plate and I can worry about that at bat – not about what's already happened. It took a lot of practice over the years. I had to just sit down and realize I can't let one thing affect the others. I have to move on to the next pitch. There's a book called ‘Finished It’ and there was a quote in there, a quote that was, to me, this is what I need to learn. She was talking about looking over at her teammates, and (saying) ‘This one is coming to you. This is the play,’ and the pitcher would take a deep breath and say ‘This pitch, this at bat, don't worry about the next play.’ We have to worry about what's right in front of us.”

Last year’s lessons: “We learned that we all have to push each other. We all play for each other and not ourselves. Our dugout this year has been incredible. When one of us makes a bad play, we’re there for that girl and telling her ‘You have the next one. Don't let it shake you. You’ve got it.’ In the weight room we’ve been pushing each other. At practice we are all pushing each other, helping each other to do better and letting each other know we've got it.”

Let’s win this: “That would be incredible, to bring (a championship) home here. There’s never been a state championship at our school; to bring that here would be incredible because our whole town supports us. When we go out to the playoffs, everyone gets on the streets, everyone has banners and they are all cheering for us. At the state finals game, you could even see it was just full of red. Our town comes with us and supports us every step of the way. To bring that home to them, that would just be huge.”

PHOTOS: (Top) Millington's Gabbie Sherman makes her move toward the plate during last season's Division 3 championship game. (Middle) Sherman huddles with her teammates before their next turns at bat.