Notre Dame Prep, one of the elite programs in Michigan with two Class B titles over the last decade, is ranked No. 1 again with a record of 24-2-2. The Fighting Irish have played 12 state-ranked teams – 10 ranked in Class A – and Saturday downed Class A No. 7 Temperance Bedford in the semifinal and then reigning Class C champion and top-ranked Bronson in the final to win the Battle Creek Lakeview Invitational. Chinn had 14 kills in the two-set semifinal and 21 in the three-set championship match to earn the first Michigan Army National Guard “Performance of the Week” of the 2017-18 school year.

The 6-foot-3 outside hitter has been on varsity since freshman year, participating in three rotations starting out, five last season and now all six. She made the Class B all-state second team as a freshman and the first team last season – and this fall she’s averaging 4.3 kills per game with a .339 hitting percentage and .453 kill percentage. But she contributes all over the floor, serving for 105 points and 36 aces in 63 games so far, with 48 blocks and 167 digs as well. Her 682 kills as a sophomore qualified for the MHSAA record book for a single season, and her 1,484 career kills through Wednesday already make that list as well although she has the better part of two seasons to play. Chinn should finish as one of the most celebrated players to take the court for longtime coach Betty Wroubel, the third-winningest volleyball coach in MHSAA history.

Chinn has earned national recognition as well and committed to sign next year with Purdue University, currently ranked No. 15 by the American Volleyball Coaches Association. She carries a 4.0 grade-point average and plans to major in dentistry when that time comes; in the meantime, she’ll try to lead Notre Dame Prep to its first MHSAA title since 2013 and after the Irish fell in a Regional Semifinal last season to eventual champion North Branch.

Coach Betty Wroubel said: “Yes, being 6-3 helps in volleyball, but height alone isn’t going to get it done. She’s a student of the game, she works hard in the game, and it’s so much more than stats. Her leadership on and off the court is exemplary, up there with the top kids I’ve worked with. And it’s not just hitting; she wants to be the best defender, she wants to be the best server, she wants to do it all. She has a high volleyball IQ, and her biggest improvement has been her ability to read what the other team is doing offensively, what they’re trying to do to stop her … for someone so young to be able to see that, it’s pretty special.”

Performance Point: “In practice, we've been putting a lot of work in, not just calling the ball, but letting each other know what spots are open and analyzing the other side of the net to find and expose the other team's weaknesses,” Chinn said. “We've been working really hard on that, and I thought that came together a lot to help us be in the finals. My (biggest contribution is) communication, to deliver the information that I see to each individual teammate in a unique way which is best for them … I want to be someone they can look to for calmness and confidence in us as a team, especially in pressure situations. The Bronson game, I think we mentally and physically prepared ourselves to play them. I thought we just really performed well and were in sync.” 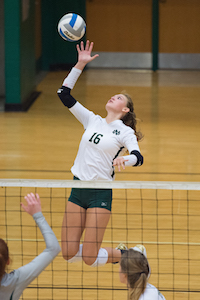 Another year wiser: “The game is slowing down even when we play high-level competition. For example, the Mercy game I saw things I wouldn’t have seen a year ago, like reading their shoulders and their arms and where they’re facing and their hips and anticipating what’s going to happen next. And being there before they even know where they’re going to put the ball.”

Learning from a legend: “Honestly, it's an honor to be an athlete and to have (Wroubel) as my coach. I've learned so much over the three years already I've been here. I can't say I go a day without learning something new or adjusting something that will help me now and in the future.”

Paging Dr. Chinn: “I’m going to major in dentistry. I think it would be really interesting, and I could do some good things in that area. I’ve always been into the medical field, and I think being an orthodontist – I’m really into math and sciences – I think that would be a great place for me.”