During a championship weekend of headline-grabbing pitching performances, the most talked about likely came from Shuboy, who threw a no-hitter to lead Richmond to its first MHSAA softball championship with a 2-0 victory over Vicksburg at Michigan State University. Shuboy shut down a lineup batting .433 to earn the Michigan National Guard “Performance of the Week” for June 13-19.

Shuboy struck out seven and walked only one batter, following a Semifinal where she struck out eight and walked two in a 6-2 win over Escanaba. Batting cleanup, she also drove in runs in both games. She finished this spring with a 17-3 record and 199 strikeouts, and carried a .348 batting average into the final week.

Coach Howard Stuart said: “We had to slow her down several times, because even the official said, ‘She’s working too fast. Slow her down.’ So we had to physically slow her down. She was in such a hurry to get the ball and throw it. And there was no mention of no-hitter. Not one word was said to her at all. At the end of the game, she didn’t know. She was so focused. ... What makes her special is her confidence, I think. She believes in herself. She’s not just a pitcher; she pounds the ball. (In the Semifinal), she hit a ball down the left field line that was a line shot, went 150 feet five feet off the ground before it ever slowed down, just a screamer. She can hit. She can do everything. She fields her position well. She used to play shortstop. She plays first base. She’s a pitcher. She’s a solid kid.”

Performance Point: “I didn’t really know it was (a no-hitter) until someone told me. This is just crazy. I just gotta stay focused about every batter, keep taking a batter at a time and play at a time. My change-up was working really good; it normally doesn’t work that good. My fastball, the outside corner, that really helped us out.” 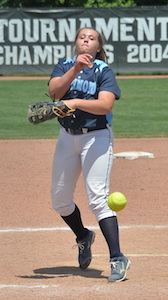 Like mother, like daughter: “She’s always helped me out with everything. She taught me how to throw. She gave me so much advice over the last couple of years. It’s just been a great experience having her.”

Pitching first, batting second: “I like pitching better. It’s just fun being the leader on the mound.”

Learning from a legend: (Coach Stuart) knows what he’s doing. It’s awesome to have him here to tell me what I’m doing wrong and help me with my errors. (He taught me) always keep your composure on the mound and never let anything get to you.”

Every week during the 2015-16 school year, Second Half and the Michigan National Guard recognized a “Performance of the Week" from among the MHSAA's 750 member high schools.

PHOTOS: (Top) Richmond’s Erin Shuboy steps toward the plate during the Division 2 Final on June 18. (Middle) Shuboy unloads a pitch during her no-hit performance.