The Eagles’ standout shortstop has enjoyed a career full of highlights, and added to her most memorable over two games May 23 against Delton Kellogg. Goble drilled three home runs during the doubleheader to set the MHSAA single-season record at 25 – and counting – and earn the Michigan Army National Guard “Performance of the Week.”

Goble had hit 23 home runs total over her first three high school seasons. But she entered the Delton Kellogg games with 22 this spring, which at the time tied her for the record set last season by both Taylor Dew of Muskegon Mona Shores and Brooke Nadolny of Harrison Township L’Anse Creuse. A shot to right field against the Panthers put Goble alone atop the list, and that accomplishment will join the 17 other entries in the record book that she’d earned entering this season. This spring she’s hitting .564 with 25 home runs and 62 RBI, and heading into this weekend she’s tied for 11th in MHSAA history with 230 career runs scored, tied for 11th with 31 career triples, tied for fifth with 48 career home runs and tied for fifth all-time with 229 career RBI.

Schoolcraft is 26-3 this spring and will play Saturday at Comstock for its third straight Division 3 District title. Goble also the last two seasons led the girls basketball team to a pair of Regional titles, the first in that program’s history. She made basketball all-state this winter averaging 19.5 points, 4.8 rebounds and 3.8 steals per game as the Eagles finished 25-1 and lost only in the Class C Quarterfinals. Goble will continue her softball career next season at Grand Valley State University, where she’ll study exercise science, and she graduated high school with a 3.7 grade-point average while also taking classes at Kalamazoo Valley Community College. But a few final high school memorable moments could be in store over the next few weeks – she’s only two behind in the race for the career home runs record, and a Regional title in softball would be a program first as well.

Coach (and father) Jim Goble said: “I remember when Lydia was 5 years old and went to a soccer camp.   The guy running the camp was coaching a team that age and right away asked if Lydia could play for him even though she had never played before. He saw that she just (went) all out every time she had an opportunity to get the ball. Thirteen 13 years later, it hasn't changed. She doesn't know anything less than going all out. She does it in basketball and does it in softball and really anytime playing a competitive sport. The other thing I have found unique with her is she is committed to the current sport she is playing. When it is basketball season, we do occasional batting lessons and she'd go to travel ball practices, but her focus and passion was on basketball. Now we are in softball season, and that is what is getting all of her attention. … She loves the game inside of the game! Watching and observing her opponent to take advantage of any weakness she sees, especially when running bases – she loves the challenge of stealing a base. … Lastly, she recognizes that the player she is and the success she has isn't just due to her (but because of) her teammates, her family, her coaches, her friends. I believe that is due in part to her life experiences, her faith in God and just who she is.”

Performance Point: “Before the game I was tied for the record, and my team made sure I knew about that. So I was actually pretty nervous and just wanted to get it over with,” Goble said of the matchup with Delton Kellogg. “My goal was to hit (the record homer) as soon as I could so I could stop worrying about it. They were like, 'Oh, you're tied. Better not strike out.' They were just messing with me. They know it won't get to my head, but they like to have some fun with it. ... (The first homer) just sounded weird coming off the bat, kinda like it was an indoor (foam practice) ball, so it didn't feel very good. I was just hoping it would keep going, and it actually did, so I was just thanking the Lord that I got it over with. (After that) it didn't really matter anymore, so I was just playing my game.”

Power surge: "In the fall before basketball season I worked out with a personal trainer. I definitely found that helped me during basketball season, and I'm assuming that carried over to softball too. That was something different I had never done before. He worked a lot on our core and our endurance – because your core plays into pretty much every part of your body. I just think it overall made me a better player and person." 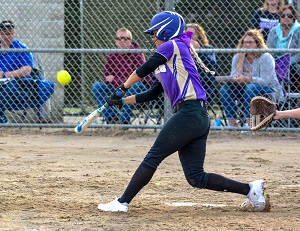 Multi-sport crossover: “I see my jumping ability, that gets a lot better with basketball and it helps me on the field when I get a line shot over my head and I can go up and get it. And basketball, definitely with my hand-eye coordination from being a shortstop. And being able to read people, what they're about to do on the basketball court helps me see base-runners -- sometimes I can tell when going to steal because they have a different stance, so that helps me.”

Thanks Coach Dad: “It's definitely pretty rough sometimes because he's telling me what to do at home and he's telling me what to do on the field. … (But) at the end of the day he's doing it to help me, and he wouldn't even be coaching if it weren't for me. So it's a good bonding thing for us and definitely strengthened our relationship at our house as well as on the field.”

What a way to finish: “I didn't have any expectations coming into this year for basketball or for softball. God has just blessed me a lot this year. … (Team success) has meant a lot. Last year was the first year we won Regionals for girls basketball; honestly, it felt like we won the state. The school was just so proud of us, and it was a place personally where the girls had never gone. And just to be a part of that and help lead that was amazing. And then to come back this year after losing five seniors and do the same thing again was truly amazing – I didn't even think we'd be able to do it this year. We just came out and played hard every night and it ended up being a great season. Then for softball, freshman year we lost in Districts, and that was a pretty tough loss (3-2 to Gobles in the District Final). Then the next year we ended up winning Districts, and the past two years we’ve lost to Coloma in Regionals – so it's been rough having to see them each year and having them take us out. But we're hoping to change that this year.”

PHOTOS: (Top) Schoolcraft's Lydia Goble winds up to throw out a runner during a game this season. (Middle) Goble powers through a swing. (Photos by Lingering Memories Photography.)