The 5-foot-11 outside hitter helped Southfield Christian to its third straight Division 4 Regional title with 15 kills and 10 digs against Allen Park Inter-City Baptist in the Semifinal and 20 kills in the championship match against Marine City Cardinal Mooney to earn the MHSAA “Performance of the Week.” The Eagles’ tournament run came to an end in a Thursday Semifinal loss to Mendon, and Van Dyke will graduate as her school’s record holder in a variety of categories including career kills, digs and aces.

Van Dyke joined the varsity as a freshman, and the team’s Regional title in 2017 and Semifinal trip in 2018 both were program firsts. She finished this season with 556 kills, 349 digs and 46 aces, and finished her career with 1,641 kills, 1,357 digs and 282 aces – the career kills and aces qualifying for the MHSAA record book. She nearly reached her school single-match record of 32 kills in the Semifinal, tallying 31 along with 16 digs as the Eagles lost a five-set heart-breaker to the reigning Division 4 champion Hornets. Southfield Christian finished the season 29-8-4 and went 111-34-12 over her four seasons with one league (this season) and four District titles to go with the three Regional championships.

The Eagles enjoyed a rare but beneficial setup this fall as Van Dyke was joined by five more seniors in the starting lineup, with the team’s other four players all sophomores. She’s grown up with volleyball – her parents both played at the college level, and her father Mike Van Dyke is Southfield Christian’s coach. After making the Division 4 all-state second team as a sophomore and first team as a junior, Emily likely is in line for another high honor this fall – and she also signed last week with Division I Abilene Christian University in Texas. She carries a 4.0 grade-point average and plans to study one of the sciences.

Coach (and dad) Mike Van Dyke said: “It’s good and bad (to be coach and Dad), because she ends up getting coached at practice and coached at home. Her mom and I both played volleyball in college, so she got a lot of feedback early and throughout her volleyball (development). … (But I’m most impressed by) just her willingness to be coached and to learn – she keeps working to improve her game. She still hasn’t plateaued. She gets better and better. We’re excited to see her playing in college.”

Performance Point: “It was a lot of pressure on the team, being six seniors. But we prepared and we did our absolute best coming up to today,” Emily Van Dyke said after Thursday’s Semifinal. “This year, I’ve been focusing on how to be a better leader. It’s not about your words; it’s about your actions. So whether I’m doing my best to get a kill or going up every time to get a block, (it’s) just anything I can do to contribute to them and bring everybody up.” 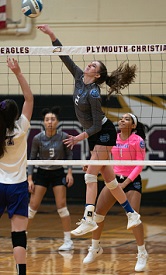 They bring me up too: “(I’ll remember) all the crazy things our team has done or gotten into. I love each of them individually. And I would never be here playing volleyball at this level if it wasn’t for them.”

Dad’s known best: “Sometimes it’s been a little rough (with him as coach too), but I wouldn’t pick a different coach in the world. I loved playing for him, and it’s really been a blast. I’ve loved all four years of high school volleyball.”

Texas, here I come: “It’s a long story, but our JV coach is from Texas, and she said, ‘You would love Texas; just look.’ So I started looking at schools everywhere, and then I found a couple in Texas I was interested in. So that’s how I ended up getting there – (and) Abilene just connected with me. I’m so excited to go down and keep playing volleyball.”

Thank you Eagles: “I think I’m going to miss the connection I have with all the players. Most of them I have in lots of my classes, so we’re friends outside of just the sport. … I wouldn’t trade this moment for the world. I’m so proud of my team.”