The four-year varsity center accomplished one of the rarest of hockey feats Saturday against No. 3 Hartland, scoring three short-handed goals in No. 2 Stevenson’s 5-2 win to earn the MHSAA “Performance of the Week.” Although the National Federation of State High School Associations does not keep a record for short-handed goals in one game, it is possible that Lause was only the second player nationally to score three at the high school level, following Lucas DeBenedet of International Falls, Minn., in 2011.

Lause is tied for the team lead in goals this winter with eight and ranks second with 12 assists as Stevenson is off to a 9-1-1 start. He made the Division 2 all-state second team last season with five goals and 12 assists over 19 games. The MHSAA also has not previously tracked a record for short-handed goals in one game – but for added perspective, the feat has been achieved only once in NHL history. Lause’s first goal came in the second period, and his second and third scores came during the same power play over 1 minute, 29 seconds, during the third period.

Stevenson has had one of the state’s strongest programs over the last decade, making at least the Quarterfinals five straight seasons, finishing Division 2 runner-up twice and winning the championship in 2013. After helping his team to another title pursuit, Lause hopes to continue playing at the junior level after graduation in the spring. Whether he begins college later or right away, he’s interested in the medical field and particularly psychology – and carries a 4.4 GPA at Stevenson.

Coach David Mitchell said: "Seth is a tireless worker ... both on the ice and in the classroom. He is an extremely high-character student-athlete that works tirelessly on his craft. It's been a real honor and pleasure to watch him grow as a player, as a person and as a leader. The sky's the limit for Seth with regards to his future. He is for sure leaving his mark on Livonia Stevenson hockey."

Performance Point: “The first goal was just a fortunate bounce. I think one of their guys missed a pass, and I ended up being on a line rush 2-on-1 with my teammate Noah (Turner). I was just looking for a shot on the first one, just trying to go low stick, since he had the low stick kinda showing me a little bit of that, and the rebound just came out to me when I shot it there, and I ended up burying it,” Lause said, describing his three goals. “The second one was (Ian) Kimble had a good play with his stick. He poke-checked it around one of their defensemen, came in, and created space for himself in the zone and saw my flying into the net. And so he threw it down into the corner and I picked it up down low, and I came around the net on my backhand side and I was looking around to see where everyone was at. I kinda looked off the goalie, and the goalie I saw was low and he had the high short side open, and so I flipped it up over and went up on the high far side. And then the third one was just a good play by Adam Heard. I was calling for it. I got behind their D at the far blue and he found me and gave me a great pass on my tape, and I just came in and shot it high glove. Honestly I didn’t even know we were still short-handed on my third goal, but everyone told me after the game that it was still short-handed and I’d scored three shorties, and I thought it was pretty cool. At first … I didn’t realize to scale how big of a deal it was.” 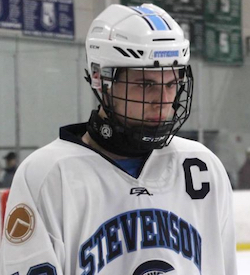 Fueled by fun: “It’s just been fun. Last year, I was more focused on just doing as much as I could to win. I still do now, but I don’t put as much pressure on myself now. It’s just a great thing, since it is my last year, just kinda taking a different approach to it this year and just letting everything go and going out and having a blast. This may or may not be my last moments playing; with my friends and for my high school, obviously this is the last year. It’s just been a lot of fun playing with these guys. I think that’s just been the big difference – me letting go mentally and just having a blast doing it. … I’ve always known there’s been something special (with this team), just every year we’ve been here. But this year especially, it’s been just a lot of guys bought in earlier. It just happens quicker with some teams than others. The approach that we’ve had has just been a lot more relaxed, a lot more fun. This group has really connected with one another, and everything’s just clicking right now.”

Play hard, cheer hard: “We usually go to all the other events that we have (at school). So basketball, swimming, volleyball, other sports – we always attend their games. We try to show support that way by going and trying to create a small student section if you will,  the whole hockey team. We go to every sport that we can, even tennis we go to. …. Our coach really takes pride in that too, because for everyone who comes to our games, all the peers who come to our games, he likes to give back to them and say thanks, honestly, just for a support they give us. Without them, it’s totally a different environment.”

Stevenson strong: “We just work hard. Our effort is our floor here. We’ve always prided ourselves on being one of the hardest-working teams, both on and off the ice, also involving ourselves in the community (and) we reach out to a lot of teams. We go to a lot of other team events here at our school. We just put a lot of pride in ourselves and the extra stuff we do. It’s just what makes us, us. We’re very involved in development and trusting the process of development and just being a team that works hard. We really just pride ourselves on that.”

The doctor is in: “Anything medical, I’m really interested in. … I’m mostly focused on the brain. I just love how the brain works. There are other organs like the heart that everyone knows about – we know every single little detail about the heart. But the brain is just something that’s so mysterious that a lot of people haven’t figured out yet. So that’s a thing that intrigues me – what is really going on, and something to just figure out because it’s a developing thing right now.”

PHOTOS: (Top) Livonia Stevenson's Seth Lause is a four-year contributor to one of the state's top programs. (Middle) Lause also is serving as a captain this winter. (Photos courtesy of the Livonia Stevenson hockey program.)