The Bulldogs closed one of the most dominating runs in MHSAA Baseball Tournament history with their first championship Saturday, and Clark turned in a performance to match. The pitcher/centerfielder threw a four-hit shutout in the 9-0 Division 4 Final win over Saginaw Nouvel, capping a run of 44 straight scoreless innings pitched to close his junior season as he earned the MHSAA “Performance of the Week.”

Clark’s pitching statistics this spring were jaw-dropping. He finished 13-0 with a 0.20 ERA – good for seventh lowest in MHSAA history. He had 116 strikeouts in 70 innings pitched, with 11 strikeouts in the championship game including for the season’s final out. He was 4-for-7 from the plate over the Semifinal and championship games to push his average to .500 for this spring, and he also finished with 48 runs scored and 52 stolen bases (tied for 19th most) on 54 attempts over 32 games. Summerfield defeated Gaylord St. Mary 5-0 in the Semifinal on the way to meeting Nouvel on Saturday, and finished with a combined scoring margin of 89-2 over eight postseason games. The championship was the school’s first at the Finals level in any boys sport. The Bulldogs also won the Tri-County Conference and finished 28-4 overall, capping a complete program turnaround – more on that below.

A three-sport athlete as a junior, Clark doesn’t plan to play football as a senior but will return as the point guard for a basketball team that won the league this past winter for the first time since 2011-12. He’s also a 3.6 student, part of National Honor Society and student council, and is leaning toward studying business or sports marketing when high school is done. He should have some interesting options to continue on the diamond as well – the left-hander made the Division 4 all-state first team this spring as a pitcher after earning the same as an outfielder in 2018.

Coach Travis Pant said: “He’s an ultra competitor. He hates to lose, and it shows in the way he plays the game. Derek’s energy and leadership fueled this historic weekend that we had as a program. He’s a humble leader who brings an enthusiasm to the field every single day that is unmatched. What people saw this weekend in the Finals is what I have watched for the past three seasons. He plays the game the right way and is very fun to watch. … He has been the face of the rebuild we had at Summerfield. When he was an eighth grader, we went 6-28. In his freshman year he quickly became the ace and a leader in the dugout. We have won at least 21 games in every year since. Derek has pitched us to two District championships, two Regional championships and a state championship. He wants the ball in big games and the team fuels off his confidence. … Derek’s junior season was nothing short of amazing. He broke the county record for ERA with a 0.20 and was within three of the county stolen base record with 52. To do what he does on the mound and at the plate for us at such a consistent rate is amazing. Derek never had a bad day on the mound. No matter what the situation, he showed up with his best stuff.”

Performance Point: “The community's been really great about it. I can't go anywhere without having somebody say congratulations. I've had people I've never seen in my life say ‘Congrats,’” Clark said. “It's really nice to have that back-up, so to say, with our community. … With the weekend, it was just so good. All of our hard work, it finally paid off, finally got (us) to our number one goal. It's really nice to accomplish something this big. … The last out, to strike him out for the game, I was telling my catcher, ‘If we get to two outs, we've got to strike him out.’ I think that was probably the best moment. I just felt like it was more ecstatic, had us all pumped up. Because we had the confidence, I don't think it was shocking, so to say. We were really confident in ourselves and in our play because we were playing really well at the time. I think it was just more of a relief.”

Talking turnaround: “I think it’s just having guys that can play. The junior class this year was really big. We started five freshmen my freshman year. So just having that, and having guys come out. Also just having confidence in each other and trusting in each other, because team chemistry is huge. If you don’t have that, talent doesn’t really mean anything. … We’ve always been a baseball group. There’s been football and basketball, but we’ve been more of a baseball grade. I think we’ve been all right coming up, and we’ve just hit a stride the last couple of years and (we’re) just getting better.” 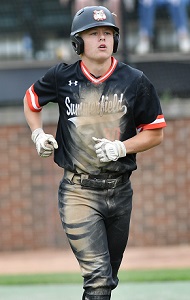 Taking the lead: “I just try to be a leader of everything, every sport I play. When it comes to basketball, I'm the point guard so you've gotta communicate, you've gotta use your words, you can't be quiet. You're the general of the floor – you've got to know what to do, what's going on at all times. That's kinda how I am with baseball. I just try to keep everybody engaged and try to get everybody looks and help everybody as much as I can.”

Title time: “It's just great to finally get it done. Our baseball program, Coach (Darrell) Polter built it up (before retiring in 2014 after nearly 40 seasons). He has 17 league titles at Summerfield, and just to finally get that state title meant a lot to us. Nobody's really ever been there to do that, in any sport, so (the community) made a really big deal. We came home after we won, and there was a big parade in town and it was just really surreal and awesome to be a part of.”

Never stop competing: “I think we're all just so competitive. We'll be in math class, doing something that's competitive, and if you lose it's hectic. Nobody wants to lose. I think that's got something to do with (our success). When we grew up, we didn't want to lose ever. That's how we've been since we were little. Some kids take it even into school, like ‘Ha ha, I have better grades than you.’ It gets wild. I’m not bad (academically), but our shortstop Brendan Dafoe has a 4-point, and Brayden Jewell has a 3.8 or 3.9 or something like that. We’re all in advanced class, so we get after each other in there.”