Even if she wasn't pitching her best, she knew that she had one of the most potent offenses in Michigan to back her up.

"Having a strong offense always builds confidence," she said.

It was the first MHSAA softball title for Mercy, a perennial powerhouse which lost in the Semifinals last season.

"Last year we had some amazing people on our team," Elmore said. "I really wish we could have done it last year for them, too. This year, we're a really close team. I consider them my sisters. Getting to do this one last time, it was emotional yesterday after our last practice. It was amazing to get the win as a team."

The Marlins (43-2) won because Elmore was able to keep Dakota in check while preserving a 1-0 lead through six innings. Mercy broke it open with a three-run seventh.

The game was a contrast to Mercy's Quarterfinal and Semifinal victories, games that the Marlins won 11-7 over Lake Orion and 9-6 over Mattawan. Elmore was taken out of the game against Lake Orion.

"Her sense of humor was incredible," Mercy coach Alec Lesko said. "The day after the quarterfinal game, she walked in and said, 'Well, coach, I'm barely making it.' I didn't understand what it was until I read one of the articles. So I said to Andrea, walking out to start the game, 'Well, you're barely still here.' We kind of chuckled. She buckled down. We got that first run and it seemed to light her up. She had that look in her eye. She was golden. It's one of the best performances I've seen."

Elmore allowed only five hits and one walk, striking out five.

"My team made all the plays when I pitched it to them," she said. "For me, the heat definitely helped, and my pitches were working well. I felt really confident. Just having them around me and thinking this is our last game really pumped me up to do well."

"She knew it was a mechanical thing that was going wrong, and she just didn't have time to fix it with Lake Orion," he said. "That Mattawan game, there were people who thought she was struggling still. She didn't walk anybody and struck out eight. I don't know about you, but when you're playing a team that hits the ball and scores double-digit runs every day, you've got to give her credit." 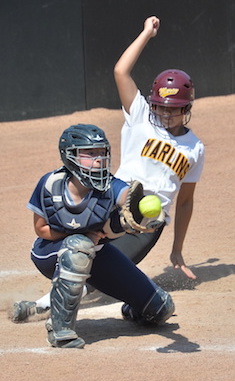 Elmore got all of the support she would need in the top of the first inning. Anna Dixon led off with a walk and scored on a triple deep to left field by Sophia VanAcker.

"Especially in a game like this, it's important to come out strong," VanAcker said. "That's one of the things we like about hitting first. We can get out on top and we can take the momentum from the first inning throughout the rest of the game, which is what we did."

Nursing a one-run lead against a team as powerful as Dakota made for some anxious moments for the Marlins, particularly in the fourth inning.

Elmore escaped a jam in the bottom of the fourth after two singles and a wild pitch put Dakota runners on second and third with one out. She struck out Kattie Popko and got Claire Hamlin to pop out to shortstop Shannon Gibbons to end the threat.

"That was huge," Elmore said. "I tried to keep my composure, because I didn't want to get overconfident and then do something wrong. I just tried to stay calm the entire time."

Dakota (38-3) also threatened in the fifth. After Corbin Hison doubled with two outs for her third hit of the game, Elmore got a line out to left field.

"We've been great with two outs and with two strikes all year," Dakota coach Rick Fontaine said. "Today we didn't get swings on the ball like we have been all year. We didn't get the clutch hit when we had the opportunities."

Some of the tension was released in the top of the seventh when Mercy scored three times. Nicole Belans hit the first pitch of the inning over the fence in left field for her third home run of the season, but the Marlins weren't done. Elmore followed with a double, with courtesy runner Julia Kleismit scoring on a sacrifice fly by Megan Satawa.

The Marlins' fourth run had an unfortunate consequence. Shannon Gibbons started to come home on a flyout by Mary Reeber, stopped, then continued to the plate on an overthrow. Star pitcher Kendahl Dunford was covering the plate and got spiked in the left ankle. She was taken out of the game in considerable pain.

Dunford, a junior, has verbally committed to Florida International. She was a huge reason why Dakota won only its second District championship and its first Regional title this season.

Mercy had been to the championship game once before, losing 4-0 to Portage Northern in the 2002 Division 1 Final.