In a division that had been dominated by Battle Creek St. Philip and Leland over the last two decades, the Eagles now sit atop Class D for the second straight season.

Sisters Grace and Gabriella Kellogg led the offense with 15 kills each, while Abigail Pray contributed 31 assists for the winners, who improved to 45-8-3.

“Winning this with my daughters means everything,’’ said D.J. Kellogg. “We didn’t really plan it this way. I coached them in club. It gives you a chance to spend quality time with your kids.

“I never like being the one ranked first because you have a target on your back, but having lost eight from last year it was a completely different animal this year,’’ Kellogg added. “It wasn’t like there was a pressure to repeat because we lost most of the team. I try to play a tougher schedule so we don’t get too cocky.’’

Tied 8-8 during the first game, Plymouth Christian reeled off eight of the next nine points to take a 16-9 lead against the first-time finalist.

It was too late. Plymouth Christian was never threatened in finishing the first set win.

In the second, Plymouth Christian made its move with the score tied 5-5.

The Eagles scored three straight points to take an 8-5 lead, and after an ace by Grace Kellogg, Fowler was forced to call another timeout while trailing by four.

Fowler scored the next two points after the timeout, but Plymouth Christian was on another roll.

Robin Alert’s back-to-back aces had the Eagles in control at 13-8. The lead grew to 16-9 as the reigning champ’s poise and experience started to dominate the match.

Fowler didn’t go away easy, scoring four straight points of its own to trim the deficit to 17-14. Fowler elevated its play and Plymouth Christian got sloppy as the deficit was trimmed to 22-21, forcing Kellogg to call his first timeout of the match. 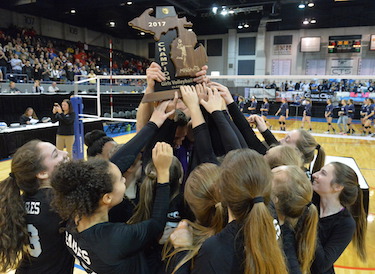 But after a few anxious points, the defending champs prevailed when Fowler hit a ball out to give Plymouth Christian a 2-0 lead.

Fowler turned the tables on Plymouth Christian in the third game, scoring six of the first eight points to lead by four with Kellogg calling a timeout in an attempt to change momentum.

It didn’t fare better after the timeout as Fowler scored the next two points to increase its lead to 8-2.

Fowler fought to stay ahead, but when a kill by sophomore Gabriella Kellogg reduced the lead to 10-9, Feldpausch called a timeout to keep her team in the championship.

Marissa Snyder had 11 kills for Fowler (38-12-5), and senior Kennedy Koenigsknecht had 25 assists. The team made quite a turnaround after winning only 12 matches a season ago, and Tuesday’s Quarterfinal victory also was a program first.

Plymouth Christian had been ranked No. 1 all season long and dropped only two sets during the postseason.

“We lost a lot of great players from last year,’’ said Grace, a senior. “To come back and do it again is great. Our JV team last year was good. We had a lot of girls come up from that team and step it up. This is our third straight year here. Last year we were ready to go and knew what to expect.’’