ANN ARBOR – Julia Kennedy isn’t worried about whether or not she finishes as the all-time home run leader in Michigan prep softball history. While it’s been a lot of fun chasing the top rung on the ladder, Kennedy has tried not to focus on hitting the long ball.

There’s no better example of that reality when, in a game earlier this season, Kennedy, a senior first baseman for Ann Arbor Father Gabriel Richard, took a look at the defense and noticed the first baseman and third basemen playing almost on the outfield grass – figuring she was going to pound the ball. She laid down a bunt instead.

“I try and be a leader,” Kennedy said. “The defense was playing me so far back. I just went up there thinking I needed to advance the runner. I wanted to show everybody that I could put the bunt down. I think people were shocked, even my coach.”

The runner did move up a base, but Kennedy found herself in a bit of hot water with her coach, Nicole Lenhoff.

“We were playing Cabrini, and we were down a run,” Lenhoff said. “I had been telling the girls that if you have the opportunity and they are playing deep, you have to lay the bunt down once in a while to keep them off guard.

“When she did it, I think I yelled at her. We had a talk later about the situation and her being a power hitter, and I told her not to do that in that situation again. But, that’s who she is. She is all about the team.”

Kennedy, 18, has already committed to playing college softball at Miami of Ohio. Heading into this weekend, she has 50 career home runs, putting her in a tight chase with Muskegon Mona Shores’ Taylor Dew, who reached 50 on May 16. Both girls have passed the co-record holders in Michigan career prep softball home runs heading into this season – Erika Underwood of Addison (2012-15) and Taylor Johnson from Belding (2007-10), who both hit 49. Underwood is currently playing for Central Michigan and is likely to play against Kennedy next season in Mid-American Conference play.

“Even when I was young, I could hit the ball pretty far,” she said.

It was when she started working with hitting coach Amanda Chidester, a former Cabrini star and college All-American, that she saw her power turn line drives and fly balls into fence-clearing home runs.

“It was insane how much better I became at hitting,” she said. “I made some adjustments in my swing and with my legs. I had no idea what I was doing. I became much more consistent in hitting. It took some time to put it all together.” 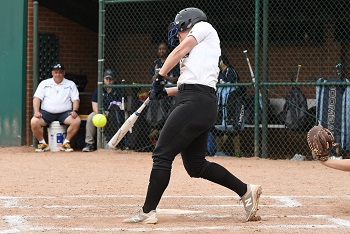 Kennedy hit seven home runs as a freshman, slugged 18 as a sophomore and had eight as a junior. She has 17 so far this season.

As a junior Kennedy played two sports in the spring, juggling soccer and softball. She’s focused on softball this year and that has made her a better player on the diamond, her coach said.

“She doesn’t like me saying so, but I think it has made her better,” Lenhoff said. “She’s more focused. There were times where she would be heading to a soccer game or coming from practice right to softball. She was just a little distracted. She’s always had the ability.”

Kennedy bats second in the Fighting Irish lineup, a move that Lenhoff made last year in an effort to get the slugger more at-bats and to help prevent the opposition from just pitching around her. With the No. 3 and No. 4 hitters coming up after her, it makes it more difficult for a team to intentionally walk Kennedy, Lenhoff said.

Kennedy is fine with taking a walk if it helps the team. But she also has more than 40 RBI and hits for a high average.

“I try not to think about the home runs or hitting a home run,” she said. “When I think about it, that’s when it seems I don’t hit as well. When I’m up to bat, I’m just thinking about advancing the runner or getting on base or just making contact.”

Julia is the daughter of David and Julianne Kennedy. Her father was a softball umpire when she was younger, and one of her brothers played baseball. She picked up his sport, mainly playing baseball at first.

“I didn’t play softball until I was like 10,” she said. “I learned to play by playing baseball.”

When she does make contact, and she knows the ball will be sailing over the outfield fence, Kennedy admits she gets a special feeling in her stomach.

“Oh, it is such an adrenaline rush,” she said. “The feeling when you hit that sweet spot with the bat is unbelievable. I just love it.”

PHOTOS: (Top) All eyes are on a drive by Gabriel Richard’s Julia Kennedy this season. (Middle) Kennedy puts a charge into another swing this spring. (Photos courtesy of the Ann Arbor Father Gabriel Richard softball program.)