By Paul Costanzo
Special for Second Half

It’s been nearly 10 years since Jacob Cronenworth and Tyler Motte were teammates at St. Clair High School, but the pair still managed to energize their hometown in 2020.

Cronenworth tied for second in the official National League Rookie of the Year voting, which was announced Monday – and won several Rookie of the Year honors from other organizations, including his fellow players – after a standout first season with the San Diego Padres.

Motte was a key cog for the Canucks as they made a run to the Western Conference semifinals, scoring four goals and adding an assist in 17 playoff games, and earning himself a two-year contract extension in October.

And as the folks back home were reveling in that success, both were happy to have the support.

“The support of our town has been crazy throughout my career, even back when I was at Michigan,” Motte said. “When you have the support of not just your friends, family and loved ones, to have it go to an even bigger population where you grew up, that’s cool to see.”

Motte and Cronenworth provided plenty of great memories while students in St. Clair, most notably helping the Saints win the 2011 MHSAA Division 2 baseball championship. Cronenworth was the winning pitcher in the title game, while Motte had two hits and scored what turned out to be the winning run against Grand Rapids Christian.

“Obviously, that was an incredible team,” said Cronenworth, who was a junior that season. “We only lost one game the whole year. It was just a special group of guys. We were all friends, we all played little league together. We’d all play street hockey and basketball together in the summers. It was a great way to cap off our childhood.”

That team featured 10 players who would go on to play college athletics. Two – Joel Seddon and Jared Tobey – joined Cronenworth and Motte as professional draft picks, as they were both selected in the MLB Draft. Another, Jeremy Carrell, is now the Detroit Tigers bullpen catcher.

Most of the players on the title team had been playing together since Little League, where they also had plenty of success, taking second in the state in 2006 before a handful of them came back and took third the next year. As they stayed together, the wins kept coming.

“I think at the time (2011), with that group of people, our eyes were on a state championship,” Motte said. “I was in more of a supporting role, because we had a lot of good baseball players. Just looking back, it was kind of crazy.

“Going through with those guys and how much fun we had in Little League really made the camaraderie we had in high school so much stronger. We had guys that really cared about each other, and that’s what made it really fun.” 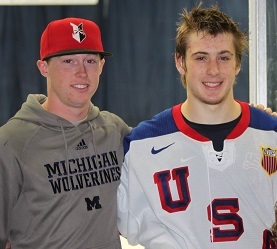 The 2011 Division 2 Final was Motte’s final competitive baseball game, as after his sophomore year he joined the USA Hockey National Team Development Program in Ann Arbor. He had planned to continue playing baseball while going to school at Ann Arbor Pioneer, but said that it didn’t work out.

Baseball was a big part of Motte’s athletic upbringing, just like hockey was a big part of Cronenworth’s. The two had played travel hockey together locally in Port Huron, and Cronenworth continued to play the sport through high school. By that time, baseball had started to look like his path forward, but he was still a star on the ice, winning the Macomb Area Conference Red MVP.

“It was one of those things, I think Tyler wanted to play both in college, but it was a decision that we kind of had to make – I always wanted to play hockey,” Cronenworth said. “I think probably my sophomore year of high school, maybe freshman year when I got called up to the varsity in baseball, that was the turning point. But (hockey season) was huge. It just gave me a rest from baseball. When we were younger, yeah, you’re playing street hockey in the summer, but when it was baseball season, we played baseball, and when it was hockey season, we played hockey.”

Both went to University of Michigan to continue their academic and athletic careers and took winding professional paths before getting the opportunities they’re currently enjoying.

Both already have been part of multiple pro organizations. Cronenworth was dealt to San Diego after beginning his career as a Tampa Bay Rays draft pick. Motte was a Chicago Blackhawks draft selection and after his first season was traded to the Columbus Blue Jackets, who later sent him to Vancouver.

But while they may both be out west now, their biggest fans remain in St. Clair – unless you count each other.

“I got to watch him play basically every single game besides,” Cronenworth said. “He had that game where he scored two short-handed goals, and I’m in my living room at 10:30 in the morning screaming at the TV. We have a group chat with the guys we played with in high school. We’re like one big family. We grew up together.” 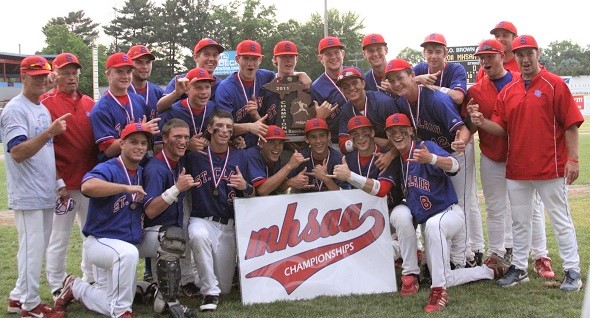 PHOTOS: (Top) Former high school teammates Jacob Cronenworth (left) and Tyler Motte meet up while Cronenworth plays minor league baseball for the Bowling Green Hot Rods in 2016. (Middle) Cronenworth shows his support for Motte during the latter’s time suiting up for USA Hockey. (Below) Cronenworth holds the trophy and Motte is bottom row, second from right, as St. Clair celebrates its 2011 Division 2 baseball championship. (Photos of Cronenworth and Motte together courtesy of Tyler Motte; head shots courtesy of MLB.com and NHL.com, respectively.)