But this latest celebration was as much a testament to how far they’d come as to what they accomplished again this season.

Rockford entered this winter minus a trio of Division 1 standouts who helped turn the team into a powerhouse the last few seasons but graduated last spring.

On Friday, the Rams had only senior sisters Nicole and Carly Coughlin compete on all four apparatuses, but received scores from six gymnasts as eight competed in at least one event. That team effort was enough to land Rockford 0.525 of a point clear of runner-up Canton with a winning score of 145.300. 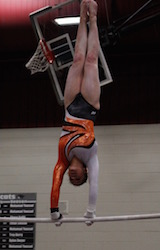 “We lost a lot of our good seniors last year, and we had a ton of good freshmen coming in, so we didn’t really know what to expect,” Nicole Coughlin said. “But I’m so happy with what we did today. We had to work a ton for it this year; the other two years we had strong seniors, we knew we were contenders for it. But really we had to build up from really nothing this year.”

Just two seasons ago, the Coughlins and teammate Kaitie Killinger were sophomores contributing to a Rockford/Sparta co-op team looking to win the program’s first championship since 1989.

Rockford on Friday became the fourth Lower Peninsula team since the beginning of MHSAA Finals in the sport in 1972 to win at least three straight championships, joining Ludington from 1975-79, Holland from 1994-97, Tri-Farmington from 2004-06 and Grand Ledge from 2008-13.

Nicole Coughlin’s 37.250 all-around score Friday ranked third at the meet, and Carly ranked fifth with a 36.725. Killinger and freshmen Morgan Case and Ashley Faulkner all posted scores of 9.0 or higher on at least one apparatus, and sophomore Chantel Lokers also contributed a score tying for the team’s fourth-best on bars.

Only a month ago, the Rams were searching for consistency, disappointed after a close win over a local rival that served as a wake-up call. Practices became more focused, technique more crisp and daily performances more consistent.

“We had a strong team from the beginning, but we have slowly built all season long and we just happened to peak at the right time,” Rockford coach Alyssa Burke said. “They had a lot of pressure on them this year. From the first meet, it was constant ‘Oh, are they going to three-peat?’ We just told them we’re a different team this year, we’re a rebuilding team, and we’re going to go and do our best every meet and hopefully slowly build and get better all season – and hopefully three-peat, and if we don’t still have a great season.

“We really did all we could. Whether we won or lost, we were just proud that we’d done our best.”

Annual contender Canton pushed the Rams as far as possible, however. After both had finished beam, floor and vault, the Chiefs trailed by 2.325 points. Rockford went first on bars and scored 34.850. But although Canton posted the day’s highest bars score of 35.725, it wasn’t enough to make up the entire deficit. 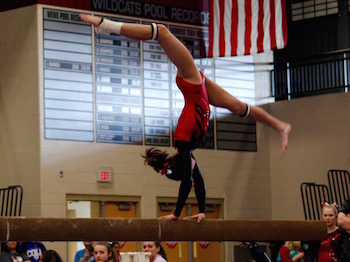 But Canton couldn’t be disappointed. After finishing first or second every season from 2011-15, the Chiefs slid to fifth at last season’s Final.

“Our mantra this week was, ‘Girls, can you win?’ And last year it was, ‘Well, I don’t know’ and they ended up fifth just because they didn’t have the attitude,” Canton coach John Cunningham said. “This year, they went, ‘Well, maybe we could win.’ Well, (our coaches) have said all along, you guys could be state champs. Give or take six tenths … we could definitely be state champs.”

Grand Rapids Forest Hills senior Christine Byam totaled the day’s highest all-around score of 37.500 as her team finished sixth. Senior Courtney Casper had the second-highest all-around (37.450) in leading Brighton to a third-place finish, up from 11th last season and its best since also finishing third in 2005.

PHOTOS: (Top) Rockford coach Alyssa Burke (right) embraces one of her gymnasts after the team's final rotation Friday. (Middle) A Rams gymnast performs on bars. (Below) A Canton gymnast performs her beam routine. (Click to see more at HighSchoolSportsScene.com.)