Saturday’s MHSAA Division 1 Final had moved into the eighth inning, and Warren Regina teammate Marisa Muglia had led off the bottom half by reaching first base on an error. After pinch-runner Jenna Holt moved all the way to third base on a sacrifice, James watched Howell walk Regina’s next two hitters to set up force plays at every base.

Now the Secchia Stadium bases were loaded for the Saddlelites freshman.

James sent a grounder back to the pitching circle, and a bobble gave Holt enough time to cross the plate and finish a 3-2 win that clinched the program’s seventh Finals championship.

“When Adriana came up and the pitcher bobbled it … I have no words for it,’’ Holt said.

Added James: “All (the pitcher’s) balls were moving outside. I just saw the ball right on the inside corner, low, and I just went for it. We had nothing to lose, and it paid off. I was surprised they walked the two batters because it has really never happened. I was really nervous.’’

The championship was the program’s first since 2015, and all seven have come in Division 1 or the former Class A under longtime coach Diane Laffey.

Howell’s Avrey Wolverton opened her team’s half of the eighth inning with a single, and Maddie Springer walked. Both moved up, but the threat ended on a Muglia strikeout.

“This is a resilient group. They never quit,” said Laffey, leader of the Regina program since 1963. “They are very team-oriented. The team chemistry is outstanding. The seniors have made the freshmen feel as welcomed as anyone could. I thought when we got ready for playoffs in the Catholic League, we were ready to make a move at that point.’’ 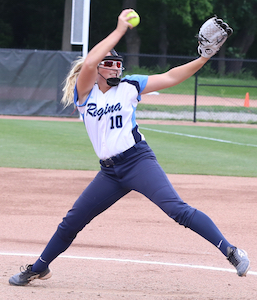 Howell ran into problems in the second inning when a hit batter and two walks loaded the bases for Jacqueline Jozefczyk. She promptly singled off the glove of the shortstop to score two runs for the Saddlelites.

Muglia managed to keep the Highlanders at bay despite giving up some hard-hit line-drive outs to the outfield. Even after giving up doubles to Maddie Gillett and Skye Grant, the Regina ace was able to keep Howell off the scoreboard through four innings.

Regina had scored two runs in the second inning, and the Highlanders broke through in the fifth when Rosie McQueen singled and senior outfielder A.J. Militello doubled off the wall in left center field to cut the deficit in half. Muglia got out of the inning with a strikeout.

Jozefczyk led off the fifth inning with a double, and Alana LaRue sacrificed her to second base. But that rally died, and the Saddlelites clung to a one-run lead.

Howell kept banging the ball. Gillett walked in the sixth inning and Wolverton singled her to third on a hard drive past the shortstop. Springer tied the game on a sacrifice fly, as courtesy runner Avery Pruss tagged up and moved to third. But Muglia regained her composure and got another strikeout and popout.

Neither team threatened during the seventh inning, sending the game into an extra frame.

Muglia finished with 12 strikeouts, and Howell pitcher Molly Carney struck out seven and gave up only five hits.

PHOTOS: (Top) Warren Regina greets Jenna Holt after she scores the winning run in the Division 1 Final on Saturday. (Middle) Saddlelites pitcher Marisa Muglia unwinds toward the plate during a 12-strikeout performance.