EAST LANSING – Macomb Dakota had unfinished business at the Division 1 Softball Final against Grandville on Saturday at Michigan State.

The Cougars lost in last year’s Final, 4-0, to Farmington Hills Mercy while pursuing their first MHSAA title. But they earned another shot this weekend, against a Bulldogs team also looking to win a first championship in program history.

A bases-loaded wild pitch sent Dakota’s Kattie Popko home to score the winning run in the bottom of the eighth inning for a 4-3 victory and the Cougars’ redemption.

“We always depend on each other and we always, always, always never give up; that’s something that helped us win today,’’ said Popko, a senior outfielder who had two hits. “As soon as I saw the ball go high, I knew I had to go. Right from her hand it’s an immediate trigger. I had to go for it.

With one out in the eighth, Popko reached base on an error by the third baseman, and Julia Salisbury –  who had driven in the first three Cougars runs and had three hits – singled to put the winning run at second base with pitcher Kendahl Dunford coming to the plate. Dunford singled in front of the rightfielder to load the bases with one out.

Grandville pitcher Ellie Muilenburg struck out the next batter. Dakota’s Arieanna Grammatico was at the plate when the wild pitch got away.

“It was a great game; we went toe-to-toe with the best team in the state,’’ said Grandville coach Troy Ungrey. “I will feel better about it in a couple of hours. I’m proud of the girls. We’ve come a long way. You know you’re going to see great pitching in the state championship game. That being said, I think if they aren’t the top two pitchers in the state they have to be in the top five; both of them. Hats off to (Dunford). We were a little high on the pitch. We were planning to go up in the zone. It just got away.’’ 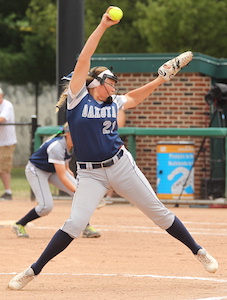 “It’s good to see your hard work pay off,’’ said Dunford. “This is where it gets you; you get a state championship if you keep working hard. Every girl has to have the mentality that you want this, and it comes down to who wants it more. I think we showed that we did.’’

“I said at our banquet that when you’re No. 1 everyone is gunning for you,’’ he said. “You get everybody’s A game every week of the season. After being here last year and losing in the Finals and coming all the way back … to fight all the way through and win is great for the girls, especially for the ones who were on the team last year.’’

Dakota got off to a quick start in the first inning. Corbin Hison singled and made it to second on an error. Olivia Popko singled and Salisbury doubled both home to give the Cougars a 2-0 lead.

Muilenburg singled with one out and Traci Merriman hit a shot that got under the glove of the diving centerfielder. Merriman made it around the bases to tie the game, 2-2.

Grandville kept hitting and got an RBI single from Kalli Gibson to take a 3-2 lead in the top of the third inning. Salisbury drove in her third run with a two-out single to tie the game, 3-3, in the bottom of the third.

It stayed that way as both pitchers, Dunford and Muilenburg, allowed just five hits each and enjoyed good defense behind them.

Dunford had reached double-digit strikeouts by the top of the seventh inning, but Muilenburg kept the Cougars’ bats silent as well. She finished with 10 strikeouts, and both walked only one batter.

PHOTOS: (Top) Macomb Dakota's Kattie Popko slides in for the winning run in the Division 1 Final. (Middle) Kendahl Dunford prepares to deliver during her 11-strikeout performance.