Richmond finished runners-up in Division 3 to the Fighting Irish for four straight seasons from 2015 to 2018, before finally breaking through with the school’s third competitive cheer Finals championship last year.

“We were fighting every year to get over that hump, and then we got over it and then the fear set in: Can we do it again?” said Kelly Matthes, who is in her 30th year of coaching cheerleading and 12th as head coach at Richmond.

The Blue Devils answered their coach’s question with a resounding “yes” on Saturday evening, leading from start to finish and capturing their second-consecutive Division 3 title at the Delta Plex with 784.28 points.

Richmond came out laser-focused, dominating the first two rounds and building a 3.2-point lead heading into Round 3.

Then things got interesting, at least for a moment. Richmond, which went second in the final round, was not nearly as sharp as in the first two rounds. The Blue Devils had a couple of wobbles, but held it together and finished their challenging open round routine in style.

“We had a small little issue in that final round, but we practice in case of that,” explained Matthes, who is assisted by Melana Szczesniak and Lauren Riggs. “Don’t expect it to be perfect, and prepare for something to go wrong. They didn’t stop or give up; they just kept going.”

Croswell-Lexington actually had the best score in Round 3, but Richmond’s fast start was far too much to overcome.

“We know we need to build a big lead at the beginning, just in case something goes wrong later on,” said senior Madison Daniel, whose team was champion of the Blue Water Area Conference and won 10 of its 11 competitions. “That was our mindset.” 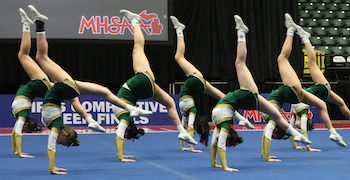 Daniel was one of three returning senior all-staters for the Blue Devils, along with Emily Mikolasik and Jordan Valentine. Sophomore Makenna Parker was also first team all-state last year, and senior Nicole Logghe was second team.

Those seniors finished among the top two at the Finals all four years of their high school careers – runners-up as freshmen and sophomores and champions as juniors and seniors. Marshall said the turning point came when they stopped being obsessed with Notre Dame Prep, and instead concentrated on their own improvement.

“After 2017, we really focused on ourselves and had tunnel vision,” said Marshall. “That’s how we kept getting better, and today was our best.”

Next year could be a rebuilding year or a reloading year for Richmond, depending on your point of view. On one hand, the team is losing 10 seniors and has only two juniors in Samantha Bryant and Jenna Jaissle. On the other hand, the team also has 28 athletes on its roster.

“The way I look at it, I still have 18 kids returning,” said Matthes, who noted that most of the 10 seniors have been cheering together since they were children at the Richmond youth cheer camp. “These seniors wanted to leave a legacy, and they sure did that.”

PHOTOS: (Top) Richmond hoists the Division 3 championship trophy for the second-straight season Saturday at the Delta Plex. (Middle) Pontiac Notre Dame Prep performs its routine on the way to a repeat runner-up finish.