It doesn't matter if it's an MHSAA championship game against a team with a .433 batting average and a full set of bleachers on either side of her.

Pitching is easy for Shuboy.

Talking about it? That's when the nerves start to show.

"I'm so overwhelmed," the freshman pitcher told a group of reporters after throwing a no-hitter in Richmond's 2-0 victory over Vicksburg in the MHSAA Division 2 championship game on Saturday at Michigan State University.

When one more reporter joined the scrum around Shuboy, she exclaimed, "Oh, my gosh! There's more!"

She'd better get used to the attention, because she has three more years of dealing with interview requests in high school, and possibly beyond that in college.

"She feels like she doesn't have anything to say," said freshman catcher Kennedy Caperton, who has been playing softball with Shuboy since elementary school. "Once you get to know her, she opens up. I think she's just in shock about it."

Shuboy pitched the 14th no-hitter in an MHSAA Final, the first since Mattawan's Lauren Gevaart had one in the 2011 Division 1 title game. Shuboy struck out seven, facing the minimum of 21 batters.

The only runner she allowed was pitching counterpart Avery Slancik, who walked with one out in the second inning. A grounder by Olivia Holmes forced out Slancik's courtesy runner, Lauren Goertler, at second base. Holmes was then caught stealing by Caperton to end the inning.

Shuboy retired the last 16 batters she faced. Even though the scoreboard told the story, she had no clue she'd thrown a no-hitter until a reporter told her while walking from the field to the awards area.

"We had to slow her down several times," Richmond coach Howard Stuart said. "Even the officials were telling us to slow her down. She was in such a hurry to get the ball and throw it. There was no mention of a no-hitter; not one word was said. Even at the end of the game, she didn't know. She was so focused. The team was not allowed to say anything to her."

Richmond's two runs came in the top of the fourth inning. Lindsay Schweiger led off with a single to left, then moved to third when the throw to first went into the outfield on a bunt by Allison Swantek.

Shuboy delivered the first run with a slow groundout to second base. 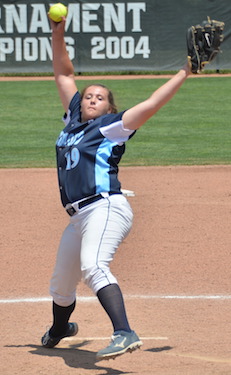 "I just wanted to make contact with it," Shuboy said. "That's all we had to do, get the RBI."

Swantek made it 2-0 when she raced home on a wild pitch.

Vicksburg went down in order in the final five innings, striking out six times, but putting three balls in the outfield. The final out came on a foul ball down the right field line.

"The few solid hits we had went right at them," Gephart said. "One of our quicker girls, they were playing way up to take away the bunt option we've used in the past. You have to give them all the credit. They're a good team. They wouldn't be here if they weren't."

Shuboy broke down when asked what it meant to help deliver a title to Richmond's six seniors.

"I just wanted to help them out," she said. "I'm gonna cry. I just wanted them to have a good end of their senior year, and a state championship would be a perfect way."

One of those seniors, Schweiger, knows that the program is in good hands with Shuboy and Caperton returning for three more years as the team's battery.

"Erin handled it so well," Schweiger said. "She could be put in tough situations and play fantastic. Kennedy can throw people out like it's nothing. She's amazing at catching. They work so well together, because they've been playing with each other since they were little; all of us have, basically. They'll be good next year, too."

Slancik allowed six hits, struck out eight and didn't give up a walk for Vicksburg (36-9). She kept the game close by getting out of jams in the fifth and seventh innings after Richmond moved runners to third base.