SAGINAW — The trash talk of an intense rivalry can wait.

The Saginaw Swan Valley seniors also are helping each other attain that goal, providing the other with one of the best training partners available in the state.

When the MHSAA Division 3 Individual Wrestling Finals end March 5 at The Palace of Auburn Hills, Santos and Suitor will no longer be teammates for the first time in six years.

The next stop for Santos will be Michigan State University, where he will wrestle for the Spartans.

Suitor will move on to University of Michigan to wrestle for the Wolverines.

While the irony of two teammates becoming rivals isn't lost on either wrestler, it's a storyline they've minimized during their final season together at Swan Valley.

"We'll have an occasional laugh about that," Suitor said.

"Yeah, we get that a lot," Santos said. "We've talked about it a little bit, but not too much. Right now it's all about business, talking about what's happening right now. It's about states and stuff like that. I'm sure we'll get to that more."

As wrestlers in the same college conference, there is the chance that Santos and Suitor could one day take the mat against each other. They are only one weight class apart, Santos wrestling at 135 pounds and Suitor at 130. Santos has always been significantly bigger than Suitor, but the weight gap has closed to within five pounds this season.

"We don't really talk about it too much," Suitor said. "It's definitely a possibility. We're getting pretty close in weight. We don't really focus on that. Right now, the primary goal is to finish out the year on the best note possible at the state championships. I can see us talking about it later down the road. We'd both give it our all. It wouldn't be anything less than what we've been doing."

What Santos and Suitor have been doing day in and day out in the Swan Valley wrestling room is prepare each other to succeed on the biggest stage.

While they've never wrestled against each other in a competitive match, their practice sessions can be tougher than some of their matches.

Suitor knows that he can't take a day off in practice with a partner like Santos awaiting him. 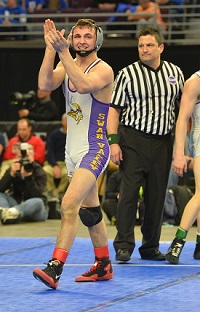 "Matt is an extremely hard worker," Suitor said. "As soon as you enter the room, you know you're going to go 100 percent. That's really good to know. He helped me get to the next level. We thrive off each other. It's great knowing I can walk in and I'm going to get the best partner in the state."

Santos was the 130-pound champion in Division 3 last year after taking second at 119 as a freshman and fourth at 125 as a sophomore. He is the No. 1-ranked wrestler in that weight class in all divisions, according to MichiganGrappler.com.

The only loss for Santos in a 48-1 season was a 3-2 decision against St. Johns senior Ian Parker, the No. 1-ranked wrestler in all divisions at 140 pounds and an Iowa State recruit. Santos is 190-10 in his career and is ranked 13th nationally at 132 pounds by InterMat.

"I always want the better matches with the better guys," Santos said. "That's what makes you better as a wrestler. Yeah, I want to go undefeated. At the same time, going into the state tournament I don't have the pressure to be undefeated. I have to go out there and wrestle now."

Suitor has been on the podium all three years, but has yet to grab the top spot. He was seventh at 103 as a freshman, second at 112 as a sophomore and fourth at 125 as a junior. He is ranked fourth overall in the state at 130 behind two Division 3 wrestlers, No. 1 Alex Martinez of Ida and No. 2 Kole Krauss of Grand Rapids Catholic Central.

Suitor's only loss this season was a 3-0 decision to third-ranked Dallas O'Green of Division 4 Carson City-Crystal in January. Suitor is 51-1 this season and 219-12 for his career. The 219 wins are a school record, and he’s just outside the top 30 for career victories in MHSAA history.

"It definitely sent a message," Suitor said of the loss. "It was like a blessing in disguise. It gives you something to go back and work on the drawing board to prep for future matches like that. It takes a load off going undefeated. It's a great opportunity, but it also just adds more stress than you need. You tend to wrestle more at ease. You're not afraid to make as many mistakes."

Swan Valley coach Darrell Burchfield guided both athletes through the recruiting process, starting it out by sending about 70 letters to Division I and II colleges on behalf of his wrestlers. He also asked them to come up with a list of schools which offer the degree programs they are interested in pursuing.

Suitor is going into finance with a goal of eventually working for a professional sports team, while Santos will major in physical therapy. 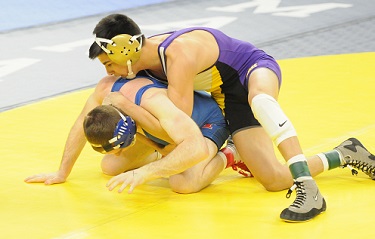 "They are very different," Burchfield said. "Both are excellent character kids. Both are hard workers. Both are strong goal-bound people. You don't get the success without that. Matt just has incredible discipline in everything he goes. He maps things out a little bit different than K.J. K.J. looks at things from the 10,000-foot view; these are the steps he needs to go and the steps he's going to take. Matt will map out this day and he'll do this. He has his meal plans down, what time he's going to bed."

Having each other as wrestling partners has helped Santos and Suitor shore up their weaknesses, Burchfield said.

"It's a huge help," Burchfield said. "Historically, K.J. had struggled with short, quick, strong guys a little bit and Matt had struggled with guys who had a lot of length. So, their body styles helped each other out this year. We've had a good room over the last several years, so they've had a lot of different people to work with. This year, they've drilled with each other every day."

The only time Swan Valley has produced two MHSAA individual champions was in 2009, when B.J. Suitor won at 112 pounds and Jake Jeske won at 145 in Division 3. B.J. Suitor, K.J.'s brother, was a three-time champion from 2007-09. He's the only Swan Valley wrestler to win multiple titles, an exclusive club Santos looks to join on March 5.

"My freshman year, the first time being in the Finals, it's scary," Santos said. "Now that I've been there for three years, been in the Finals and won, it takes a lot of the pressure off."