GRAND RAPIDS – Rochester’s run to a 14th MHSAA competitive cheer championship wasn’t as smooth as the build up to number 13 a year ago.

Of course, that’s almost always going to be the case when comparing to a perfect run like the Falcons enjoyed during 2015-16, when they won all of their competitions.

But a few bumps along the way this winter made Rochester’s latest addition to its record title total special as well. A team that usually doesn’t pull up underclassmen had five. The Falcons had 15 seniors two seasons ago and 13 last winter, but only eight this time. There were only 23 athletes total on the team, making it the school’s smallest since 2000. And by Dec. 10, another perfect run was out of reach, after a third place at an invitational at Stoney Creek won by Sterling Heights Stevenson, Friday’s Division 1 Final runner-up, with 16 more points than Rochester scored that day.

“What happened last year was very out of the ordinary. That was a huge blessing for us,” Rochester senior Megan McMurray said. “This year was a little more of a normal path that we usually take. We did place low in a few competitions, but we rose every time that we fell, and our main goal was just to blast it out during our playoffs, and we did just that. And we got the results (again) that we got last year.”

Rochester won Friday’s Final at the Grand Rapids DeltaPlex with a score of 789.02, nearly two points ahead of Stevenson and four more than the rest of the field. That overall score was the third highest posted in Division 1 this season, and the Falcons’ Round 3 total of 320.70 tied its division-best score set earlier this winter.

And it made Rochester a repeat champion for the first time since finishing a three-season run at the top in 2007. This is the fourth time the Falcons have strung together multiple championships since winning the first three Class A Finals from 1994-96, and it’s something that’s becoming increasingly difficult at the Division 1 level as the state’s biggest schools continue to close the gap.

For example: As longtime coach Susan Wood noted, all eight teams Friday hit their Round 3 routines – and that made the Falcons unsure if they had scored enough to pull off the title.

It’s almost tradition for teams to leave the mat after Round 3 and fold into hugs and sometimes tears. Last season, the Falcons did so knowing they’d clinched; this time, McMurray said, those tears came from pulling off a routine that Wood had designed even tougher than a year ago – and even though McMurray and her teammates weren’t sure if they had the title in hand.

That refusal to “water down” the difficulty, even for a newer group like this one, is part of Wood’s philosophy. It can come with a little higher risk – but paid off again Friday with the highest reward.

“Cheerleaders do millions of repetitions of things over and over and over again to get the muscle memory where it needs to be, but with this group we had to be very mentally tough to do it,” said Wood, who has led the team 36 seasons and to all of its championships. “Because physically, I think a lot of these teams are the same. But mental toughness in newer kids is harder to pull out – so that was one of our big battles.”

The seniors – including three-year varsity athletes McMurray, Sydney Asuncion and Sam Ellison – tried to prepare their younger teammate that this might be a rockier road than the perfect recent past. 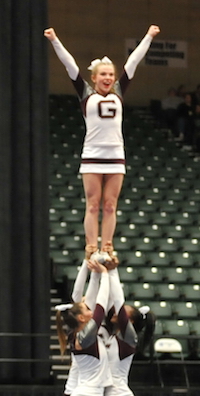 In McMurray’s words, the Falcons “understood that this was going to be a completely different journey.”

But the team started hitting all of its three rounds at the Oakland Activities Association Red finale Feb. 4, finishing five points better than a field including eventual Division 1 finalists Stoney Creek, Rochester Adams and Lake Orion.

“We were always physically capable of doing things, but a lot of the younger girls were a little bit shy and timid, so a lot of the seniors had to get them out of their shells, make some great personal connections,” McMurray said. “By the end of the season we were in full grind, kicking it, ready to go.

But one opponent that should make that streak harder to continue is Stevenson, which tied its best finish ever with its first runner-up performance since taking second in 2011. And the Titans did so with only one senior on the team – and nine freshmen competing.

Stevenson’s score of 787.06 was its best this season by two points, and its Round 3 320.20 was just a half point shy of Rochester’s meet and season best.

The Titans finished seventh two seasons ago and third in 2016.

“We had that uphill battle right from the start, which makes this even sweeter,” said coach Brianna Verdoodt of preparing her young roster. “The amount of work and push and dedication and the grit that went into getting them here. The real, real hard work was put in this year. So now it’s just starting off and keeping things fresh. We watched them truly become a team over the year … this was the best day they’ve had as a team, even off the mat as well.”

Grandville, last season’s runner-up, finished third at 785.34. Stoney Creek was fourth at 783.10 and Rochester Adams, at the Finals for the first time since 1997, finished fifth at 782.66. Hudsonville, Lake Orion and Brighton rounded out the standings.

PHOTOS: (Top) Rochester performs during Friday's Division 1 Final at the DeltaPlex. (Middle) A Grandville cheerleader is raised by her teammates during their round.