GRAND RAPIDS – Susan Wood has had more elite teams than most during 35 seasons as Rochester’s cheer coach, including 13 MHSAA champions and five more that won state championships from the coaches association before competitive cheer became an MHSAA-sponsored sport in 1994.

Admittedly, this season’s team wasn’t her most talented. But few if any performed as well under pressure as these Falcons – and that became crucial Friday as Rochester pursued its first Division 1 title since 2009, but found itself locked in the cheer version of sudden death overtime.

The Falcons led reigning champion Grandville by 24 hundredths of a point heading into Round 3. Neither team could afford the slightest error during their final routine. And, as if the scenario needed additional buildup, the two top contenders were scheduled to perform at the end of the rotation – Grandville seventh of eight teams and Rochester to finish the night.

Grandville had scored the top Round 3 in Michigan this season. But Rochester equaled that score at the DeltaPlex, posting a 322 to edge the Bulldogs by a point and a half in the round and finish with an overall 792.40-790.66 advantage to earn not only that first title in seven seasons, but also finish a run that saw the Falcons win all of their events in 2015-16.

“I don’t like to know the scores going into Round 3. I just know that my team has to do what we’ve done in the past and what we do in practice, and just put it on the mat,” Rochester senior Breonna Weaver said. “I knew we were ahead. I didn’t know how much. But I don’t like to know because I want to do what I can do regardless of where we stand.”

“When we get to a competition, we just focus on ourselves. We don’t care about any other team. We’re just so driven on doing exactly what we do at practice and living in the moment … and I just love this team for it.”

Rochester has five more MHSAA championships than any other team, although Breckenridge and Gibraltar Carlson are favored to make that margin four again during Saturday’s remaining competitions.

The Grandville/Rochester matchup was a throwback to last year – when the Bulldogs led by 26 hundredths of a point heading into Round 3 and won the title by a margin of 1.46 points. Combined, the last two seasons also have been a throwback to the beginnings of competitive cheer as an MHSAA sport – every Class A and then Division 1 championship from 1994-2009 was won by either Rochester or Grandville.

Only four schools total have won a championship in the largest-school division during the 23 seasons of the tournament.  But those other three all had won at least once since Rochester’s most recent title. 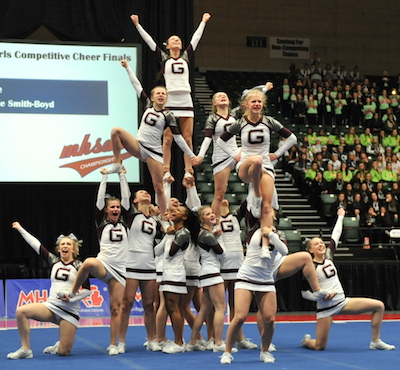 “We’ve had some talented kids, but everyone’s getting more talented. And any little flaw and your hopes are washed away,” Wood said. “I never wanted to be a has been. I didn’t want anyone to think that because we weren’t winning, we were all done winning.

“This team was really unique. We lost 15 seniors last year, so this summer, wow, our skills were really rough. ... (But) we kept winning. Usually you have some bad days. But they worked really hard to improve their skills."

Wood went on to explain that her athletes have a “performance edge” that allows them to transfer what they practice to competition even under the most stressful situations – like Friday’s, in front of a crowd so loud her cheerleaders couldn’t hear each other on the mat, and with Grandville and eventual third-place Sterling Heights Stevenson sure to deliver strong Round 3 routines as well.

All three hit, but Rochester with just enough extra to finish the run.

“We just talked about going out there and having fun, and giving it all we’ve got,” said Grandville coach Julie Smith-Boyd, who also finished her 35th season. “We number our teams, so this is number 35. Next year it’s different. Different girls, a whole different scenario.

“They’re just so … gritty, clutch. I think the Round 2 was probably the best Round 2 we’ve ever done, I mean, in many, many years.”

Rochester posted a 237.90 in Round 1 to lead Grandville by two tenths of a point and East Kentwood by fourth tenths. Rochester also had the high score in Round 2 of 232.50 – a mere four hundredths of a point higher than Grandville’s.

The Falcons’ final score of 792.40 was the highest posted in any division this season. Sterling Heights Stevenson, which posted the second-highest Round 3 on Friday of 321.20, rode that score from fifth into third place and to a season-best overall score of 788.10.

As Grandville has its tradition of numbering teams, Rochester has a tradition of welcoming visitors to practice with a special salute. After improving from not even making the MHSAA Finals two seasons ago, this group certainly earned their future welcome and place in Falcons history.

“After seven years, we finally brought it home,” Rochester senior Gabby Leo said. “It’s an amazing feeling, because whenever I go back to visit our team, they’ll yell, “State champs in the house.” It’s just … chills.

“We remember those (past) girls. They’re like our idols.”

PHOTOS: (Top) Rochester competes during Friday’s Division 1 Final at the Grand Rapids DeltaPlex. (Middle) Grandville finishes a routine on the way to placing as runner-up.