So, even though the Hurons lost five key players from last year’s team that went 32-6 and reached the Division 4 Semifinals, they entered the 2019 season with the same high expectations and a No. 3 ranking in the Michigan High School Softball Coaches Association Division 4 poll.

“I think we’re going to be OK again,” said Rogers City head coach Karl Grambau. “We lost an awful lot. We lost some pretty good players. Some of them are playing in college now, but there’s enough back and we added some good, young kids. We’re pretty excited with what we’ve got coming back.”

The caliber of players the Hurons have to replace is high and might wreck many programs. Among those who are gone is starting shortstop Kayla Rabeau, a four-year standout who was Division 4 Miss Softball. They also have to fill big shoes at third base and second base — Hannah Fleming and Jayna Hance earned all-state and all-state honorable mention, respectively, while designated player Jazmyn Saile and centerfielder Kristin Brege were both all-region selections.

To make up for those losses, Rogers City is leaning heavily on its top returning players — a core that supplied major contributions for the Hurons over the past three years. Junior pitcher Kyrsten Altman and senior Taylor Fleming, who is moving from first base to shortstop, both received all-state honorable mention in 2018, while catcher Amanda Wirgau, another fourth-year veteran, and outfielders Linnea Hentkowski and Alissa Bowden also are returning starters. Additionally, the Hurons have players like senior third baseman Cathryn Hart, sophomore first baseman Jeffra Dittmar and sophomore second baseman Karissa Rabeau ready to step in and show what they can do.

“Every year I’ve been on varsity we’ve lost some key players,” said Taylor Fleming. “We’ve always been capable of filling those positions that we’ve lost. I think we’re more than capable of doing it again this year. As long as I can remember, Rogers City softball has always been a good program and they’ve always made it pretty far (in the postseason).”

Indeed, the Hurons can put their accolades up against nearly any program across the state. Since 2012 they’ve gone 230-48, the highlight being winning the Division 4 title in 2014. They’ve also reached the Semifinals twice, won three consecutive Regionals and seven straight Districts. There also were Finals runner-up finishes in 2004 and 2001.

“I think we’ve built up a pretty good tradition all the way through, especially since 2012,” said Grambau, who took over for Charlie Fairbanks in 2003. “We want to keep it going. We’ve talked about how we have a target on our back. We also know it takes a lot of hard work to keep climbing and it’s easy to slide back, and we don’t want to do that. We want to keep going in a positive direction.”

After getting a taste of playing in a Semifinal last year, the Hurons are hungry to get another opportunity that deep into the postseason.

“A lot of us really, really want to get back (to East Lansing),” said Altman, who had a record of 17-3 last year and struck out 118 batters in 111 innings using a wicked rise ball as her go-to pitch. “It’s such an amazing experience to get to play there, and we hope to do that again and maybe get the win. 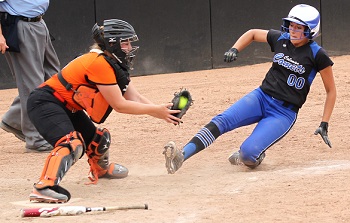 “The team has very high standards. The past couple of years we’ve always gotten super far in the playoff round, and we keep pushing and pushing to get farther and farther. We just have to keep working hard.”

The Hurons want to remove the bitter taste left from last year’s 2-0 loss to Coleman in the Semifinals. Rogers City’s bats couldn’t string together hits, and the quest for a second championship in four years was dashed.

It’s been a rare occasion when the Hurons have had trouble generating offense. Rogers City has become notable for its hefty home run totals. The Hurons have clubbed at least 30 homers each year since 2013, including a whopping 48 during the 2014 championship season. In the District Semifinal against Johannesburg-Lewiston last year, they belted nine home runs.

“I’m not going to say we’re going to hit 30-some this year, but I think we’ll hit our fair share again,” said Grambau. “We’ve got some good kids, and we work on the power hitting a lot. What we’ve done has worked. Knock on wood, we can keep it going. We’ve got to stay healthy. The kids work hard, and they buy into the system. I’m really happy with the results.”

Grambau has coached a number of sports — boys and girls basketball, track & field and cross country among them — but his tenure as the Hurons’ softball coach has stretched into its 17th season.

“It’s just been a lot of fun,” said Grambau. “It was a strong program when I started. It just happened that I could keep it going. We’ve had great volunteer help over the years. It’s just something I enjoy doing. I’ve had a chance to coach a lot of great kids and meet a lot of great people.”

Grambau has gone 435-157 as the Hurons’ head coach, a record made even more impressive by the fact that the Hurons play an extremely challenging schedule every year. Rogers City will face many of the teams listed as well in the preseason rankings and isn’t afraid to take on teams in any division.

That begins with a season-opening tournament at Farmington Hills Mercy, along with tournaments at Holton and Boyne City that will feature quality competition. A rematch with Division 4 runner-up Coleman also is on the schedule. The purpose is to be well-prepared by the time the postseason starts, when elimination is only one game away.

“Anything can happen on any day,” said Grambau. “We just have to try and get ready for the next day. One day at a time, and one pitch at a time. That’s what we tell the girls. Things will work out as long as we believe in what we’re doing.

“Our No. 1 goal is to have fun. We’re going to do our best to keep it going this year.”