The Sault Ste. Marie High School senior, an accomplished international player on the women's side, is the only female playing on her school's boys hockey team, as she’s been each of her four seasons with the Blue Devils. She is the only girl to have ever played for the Sault, which is home to one of the top boys programs in the state.

The Blue Devils, two-time MHSAA champions who finished second in the Division 3 playoffs in 2013 and 2014 and reached the Quarterfinals last year, are 10-4-1 this winter.

Roque, a forward who also plays on the team's top power play unit, has five goals and 14 assists. She has received a scholarship to play for the University of Wisconsin, which has one of the nation's premier women's hockey programs. The Badgers, coached by former Olympian and NHL star Mark Johnson, are currently ranked second in the country.

"It has really helped me see how college hockey will be," Roque said before a recent practice as the Blue Devils prepared for the Sault Lions Showcase this weekend and games against Dearborn Divine Child and Bloomfield Hills Brother Rice. Sault Ste. Marie is ranked No. 9 in Division 3 this week.

She also played on the U.S. Women's Under-18 International Ice Hockey Federation world championship team that won gold in 2015.

"The speed of the guys high school game has helped me prepare for women's college hockey," she said.

While not as fast on the high school ice, Roque knows how to compensate against the boys. Asked for her primary strength, she said, "my smarts on the ice. The guys are very fast, they are very powerful. I have to make the right pass. My stick handling skills are good."

Those skills also give her a decided edge when she does play against other females, such as the IIHF world tourney, where she led the world juniors in face-offs. Even though checking is not allowed in the girls game, her experience in the more physical brand of boys hockey has helped provide a major advantage. 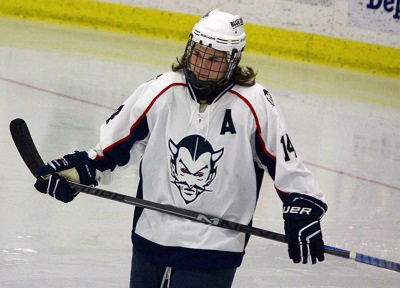 "I do enjoy the checking. The physical part of hockey is great," she said with a chuckle. "Girls hold the puck longer. Guys come at you (faster and harder) and you have to move the puck faster."

Getting knocked around in the corner in boys games is no problem. "I'm not intimidated by anyone on the ice," she said. "I've gotten stronger playing with the guys. I'm clearly not as strong, but I hold my own. It is all really just hockey to me at this point."

Her Sault coach, John Ferroni, said many opposing players and fans are not even aware there is a female on the ice. "She has definitely learned how to manage herself in the boys game," he said. "She is very competitive, sometimes even too competitive."

Indeed, she says, "I try to be the intimidating one on the ice."

That is not surprising since she has grown up with hockey a major part of her life. She began playing at age 4 and her father, Jim, is a former hockey coach at Lake Superior State University. Her uncle, Tom Bissett, is hockey coach at Grand Rapids Forest Hills Northern.

"If kids inherit things from their parents, she has inherited her dad's hockey IQ. She picked up the sport and has had a lot of hockey conversations with her father, and she comes from a hockey family," Ferroni said, noting her mother also has a strong athletic background.

Roque, who also has played golf and soccer and boasts 4.0 grade-point average taking advanced placement classes, said playing boys hockey was not a hard decision. She played in the strong Sault boys youth program from day one and realized the boys were the direction to take after playing girls hockey in the fall as an eighth grader.

"She always played with good hockey players, and they always accepted her as a girl," said Ferroni, in his fifth year as Sault coach. He said Roque "understands the game real well and made the commitment a long time ago. She is very dedicated to the sport."

Ferroni said Roque "has decent speed and decent quickness at the boys level. She is a strong skater and is very hard to knock off the puck. She is very elusive and always seems aware of what is going on around her."

That ability to see the game makes her "a playmaker without question" according to Ferroni. "She passes the puck extremely well; she has good, strong passing skills." 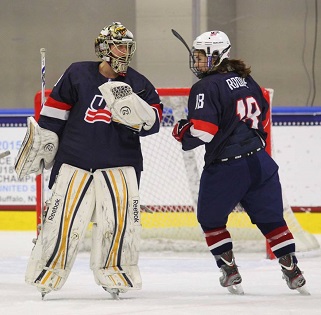 Ferroni admits he "had to look at a lot of things before taking her" on the team. After that process concluded, he said, "I knew she would be fine, but no way did I think she would rise to the level she has risen to. I didn't see that (second team all-state) coming."

After checking out girls programs, Roque and Ferroni realized the Sault High School boys team would be the best path to follow. Ferroni said playing against other girls was not fast enough, and the puck movement among the boys was much better.

"We afforded her and gave her a great opportunity," Ferroni said. "She walked into a good, strong program as a freshman and was not just being a player, but was a real solid player. She definitely has raised the bar around here for girls.

"She has helped us as much as we have helped her."

Roque said Wisconsin "was the right fit for me. I loved everything about it, about Madison. Everything is about hockey. I just couldn't go anywhere else."

This school year's participation figures will not be compiled until the spring, but about 250 girls total played on MHSAA boys teams in 2014-15.

PHOTOS: (Top) Sault Ste. Marie's Abby Roque positions herself near the net during one of her team's games. (Middle) Roque is the first girl to play on the Sault's boys hockey team. (Below) Roque, here on her U.S. Under-18 team, brings international experience to the high school season. (Photos courtesy of the Sault Ste. Marie athletic department.)