EAST LANSING – Senioritis always weighs on a spring coach’s mind. It can drain the potential from the best of MHSAA championship contenders.

Frankenmuth softball coach Brad Walraven discussed that possibility once with his team, which includes seven recent graduates. And then he forgot they ever had the conversation.

That’s how focused the Eagles have been this spring. And they were thankful for veteran composure Thursday during the final innings of the first Division 2 Semifinal at Secchia Stadium.

Carleton Airport had advanced to Michigan State with an epic extra-inning comeback against Portland in Tuesday’s Quarterfinal, and looked to be mounting another with Frankenmuth up two runs in the sixth inning. But a heads-up play and a clutch strikeout from their ace ended the rally and the only threat faced by the Eagles in a 4-0 win.

“One little thing can cost you this ballgame when you get to this point. You have to literally focus one pitch at a time … or else you could just blow up,” Frankenmuth senior pitcher Amariah Wright said. “I’m really proud of my team for staying focused all the way through.”

Since finishing Division 3 runner-up in 2011, Frankenmuth reached the Regional round both in 2012 and again last season. But both times the Eagles fell shy of returning to the season's final week.

Led this time by a strong senior class including six who start, Frankenmuth built on a league championship with wins over honorable mention Saginaw Swan Valley and No. 6 Escanaba over the last two weeks.

Airport trailed Portland by four runs in the seventh inning of its Tuesday Quarterfinal. The Jets came back to down the Raiders 5-4 with a walk-off double in the eighth inning.

Frankenmuth led by 2-0 in the bottom of the sixth Thursday when Carleton Airport put runners on first and second base with one out. A fly to left field dropped in for another single just in front of senior Alyssa Jarlock. The hit could’ve loaded the bases.

Instead, Jarlock made perhaps the most astute play of the game. Bypassing the usual toss in to second, she threw to third base and threw out the advancing runner for the second out of the inning.

Wright then struck out the next batter, and the Eagles added a few more runs to put the game away in the seventh.

“That’s what senior leadership does,” said Walraven, a veteran himself of 36 seasons and nearly 1,100 wins to rank as the second-winningest softball coach in MHSAA history. “The one thing you have to worry about with seniors is sometimes they phase out at the end of the year (with) a lot of activities with school. This group stayed focused the whole time, and they talked to the underclassmen. Everybody’s always prepared and ready to play.

“It’s a little bit of the coaches. But it’s mostly on the girls.”

Frankenmuth scored its first two runs in the third inning, with the lone hit of the rally an RBI-single by Wright. Senior Makenzie Sipes, who had reached base on a fielder’s choice, moved to third on the single and scored the second run as part of a double steal that forced a throw to second base and opened up home.

Senior Kayla Brooks scored in the seventh inning after a single, and Jarlock came around for the fourth run on a ground out after reaching base on an error and stealing second base.

Wright finished with nine strikeouts and walked only one batter. She gave up four hits and only one over the first five innings. Airport junior Emily Bindus also was sharp, giving up only one earned run for the Jets (36-5), striking out nine while giving up only three hits and walking two.

The win was Frankenmuth’s 12th straight.

“Last year was just kinda like a building year. This year finally the team is just strong. It’s so exciting to watch us just go,” Wright said. “I’ve been wanting this since my freshman year, and now we’re finally here and it’s insane. I love it.”

Wayland had unfinished work after getting back to the Semifinals last season but falling in 10 innings to Livonia Ladywood. The Wildcats entered this postseason ranked No. 1 in Division 2 as arguably the most impressive team in Michigan this season regardless of division – and only added to that reputation Thursday.

Wayland (35-2) added seven more runs in the fifth inning to finish the game for senior pitcher Mallory Teunissen, who struck out more than half the batters she faced – nine of 15 – and allowed only two hits. 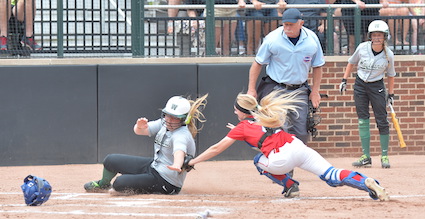 “I made sure I said let’s score on the first thing so we don’t have to wait and have stress,” said Teunissen, who also was 2 for 3 at the plate. “My sister Morgan came up and had a hit, and everyone followed, and we scored, and it just made the stress level for everybody and me so much easier.”

Wayland was playing in its third Semifinal in four seasons. But there was shock and sadness instead of celebration after as coaches and players were told of the death of Bill Merchant, father of assistant coach Nicki Cardosa and brother-in-law to head coach Cheri Ritz, earlier Thursday after an apparent car accident.

Merchant also was Wayland’s junior varsity boys basketball coach. His four daughters all played large roles in the Wayland program – Jessica and Macy appear in the MHSAA record book – and then at the college level, and Jessica, Macy and Brittini coach in the Big Ten. His wife Deb Merchant has coached tennis for Wayland.

“(I told the players) that we have another angel in the sky, because my dad was killed in a car accident too,” Ritz said. “I was the AD at Wayland, and it was after a basketball game. He was helping me and got in a car accident, so our family has been through this before.

“But we have another angel in the sky.”