EAST LANSING – Of course, Schoolcraft’s Allie Goldschmeding knew what was on the line as she sped toward first base during the eighth inning of Friday’s Division 3 Semifinal against Dundee.

And she gave everything it took to beat out her grounder and send her team to its first MHSAA softball championship game.

Goldschmeding beat out the throw to first base, allowing teammate Kayla Onken to score the winning run in the Eagles’ 4-3 win at Secchia Stadium.

“I was like, ‘I’ve gotta run as hard as I can and try to get to the base because I’ve got to put my full effort in,’” Goldschmeding said. “It feels amazing. It feels great because I felt like, with the bases loaded and there being two outs, I could deliver for my team and get us to go to the state championship (game).”

Onken got things started by drawing a walk off Dundee pitcher McKenna Schmidt. She advanced to third base thanks to walks to senior Mikayla Meade and freshman Sophie Ridge. That set the stage for Goldschmeding, whose slow dribbler rolled to Schmidt’s left. She was able to get to it and pitch it to first baseman Ashley Fietz. But it wasn’t in time. Onken crossed home plate and sent the Eagles into celebration mode.

“I was more watching the runner going home, but it was close,” Schoolcraft head coach Shane Barry said. “We’ll take it for sure, with it being our first time making it to the state (finals). We’ve been working toward this all year. It’s just amazing.”

Allie Goldschmeding wasn’t the only hero for the Eagles. Her twin sister, Kelby Goldschmeding, hit a game-tying, two-run home run in the bottom of the sixth inning to give her team a second life. Onken started that rally off with a base on balls as well.

“She’s just coming off an injury, so all she can do is really bat right now, and run,” Barry said of Kelby Goldschmeding. “It’s a little surprising she pushed the ball. She normally pulls everything. It was perfect timing for us. We needed it. It finally fired the girls up. We were a little down there for a while. We started to finally pick it up. The home run definitely helped us out a lot.”

Allie Goldschmeding, sophomore Jordan Watts and Ridge all finished with two hits for Schoolcraft (32-4), which will face Millington in Saturday’s championship game.

Junior Adrienne Rosey relieved Meade in the circle to begin the third inning and threw the final six, getting the pitching win while giving up two runs on four hits, with nine strikeouts.

Dundee coach Mickey Moody felt his team let too many good scoring opportunities slip through its hands. The Vikings had four straight hits to begin the second inning, but could not push a run across the plate.

Schmidt took the loss in the circle, despite pitching 7? solid innings. She allowed just three earned runs and struck out 10 batters. Schmidt and McKenna Salley each had two hits to lead Dundee’s offense.

“The girls had a great year. That’s just a great group of kids to coach,” Moody said. “I’m really pleased with how they did this year. That loss doesn’t change what kind of team they are. We played really good teams all year, and we’ve done well.”

A plan was developed before the season, one which would keep Millington senior Gabbie Sherman fresh for a deep run in the playoffs. Thanks to another stellar performance by Sherman and the entire Cardinals’ offense in Friday’s Semifinal win over Standish-Sterling, coach Greg Hudie might just get to see that plan play out to perfection. 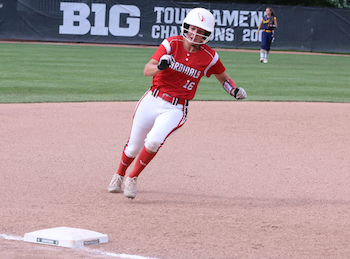 Hudie’s team collected 14 hits, scoring all seven of its runs over the final four innings, and Sherman pitched another gem to help lead her team back into the Division 3 championship game on Saturday.

“We talked before the season even started about her pitch count, where we wanted her,” said Hudie, who saw Sherman allow just one earned run while striking out nine, running her record to 22-2 with the victory. “Our overall goal was to win this (tournament). Sometimes when you have an ace pitcher, she wants to throw every inning of every game. We devised a plan because we wanted her fresh this week. She’s been pitching every game of the tournament, and she’s getting stronger and stronger, so I can’t wait to see how she does in her second championship game. I think she’s got some unfinished business to do in that, so I think she’s going to be fantastic tomorrow.”

The No. 1-ranked Cardinals – last season’s Division 3 runners-up – will face Schoolcraft in the title game.

Millington broke a scoreless tie in the fourth inning, thanks to an RBI double by junior Madi Hahn, scoring senior Leah Denome. The Cardinals would add two more in the fifth and one in the sixth before breaking it wide open in the seventh. A double by Sherman scored two, while senior Hannah Rabideau’s single drove in freshman Leah Coleman to cap off the scoring.

Denome and Hahn each finished 3-for-4 to lead the Cardinals. Denome scored three and drove in two with a two-run home run. Sherman, senior Sydney Bishop and junior Darrien Roberts each added two hits.

“What got us to this point is our defense and the strength in our pitching, and we showed that to start this game,” Standish-Sterling head coach Rich Sullivan said. “The first three innings, we were shutting down a very potent offense. But a good team will catch up with pitching, and that’s what they are. They started adjusting to what we were doing, and they capitalized on a couple of mistakes we made.

“Gabbie Sherman, she’s tough on the mound and we weren’t able to get those big hits when we needed them. We’d get a hit here with two outs, or a hit and then the next two would strike out. We couldn’t do a lot of things we like to do on offense, bunt and steal and put pressure on the defense. They took that part of our game away.”

PHOTOS: (Top) Schoolcraft catcher Jordan Watts places a tag on Dundee’s Ashley Salenbien to keep her from scoring Friday. (Middle) Millington’s Leah Denome rounds third base on the way to scoring in the Cardinals’ win.