ROCKFORD – As one champion capped a weekend Saturday that couldn’t have gotten much better, another potentially got started on what could turn into one of the most impressive runs in MHSAA history.

Yes, that’s a pretty strong statement. But Grosse Pointe United’s Cate Gagnier is only a freshman – and one who already owns a Division 1 gymnastics championship.

Gagnier posted an all-around 37.225 at Rockford High School to claim it, also finishing first on balance beam and vault with matching 9.525 scores.

A Level 8 club gymnast before joining the high school team this winter, Gagnier cleared the field by nearly three quarters of a point, making a nice jump after finishing runner-up at her Regional a week ago to Port Huron United senior Hallie Roman.

The two switched spots this time, Roman finishing runner-up, as they shared a rotation and drove each other to high marks all afternoon.

“I knew I was kind’ve good, but I didn’t know I was the best,” said Gagnier, a student at Grosse Pointe North. “I stuck all my skills. I didn’t fall on anything. I smiled on floor (exercise), with helps a lot, actually. 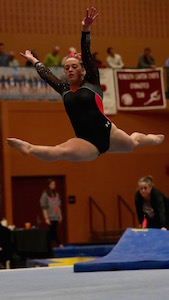 “(Roman’s) really nice. We were cheering each other on. It was really fun. She’s really good, so I felt like, ‘Oh my, I’ve got to do good.’”

Gagnier, who also won vault and beam at her Regional, said the big difference between club and her first high school season was the amount of jumps she had to master. The smiling was something her coaches have been reminding her to do as well.

She helped the team to a league championship in mid-February, but GPU fell just short of making Friday’s Team Final by finishing fourth at its Regional. Coach Kristin Remillet could tell Gagnier was disappointed she couldn’t will her entire team to the final weekend of the season, but she made the most of her individual opportunity.

“She has won some of the really big invitationals so far this school year and this season, and so I was very hopeful for her,” Remillet said. “But it’s her first year. I was not going in thinking that it would be quite the performance that she got today. She was shining the entire day.”

So too was Farmington United senior Elisa Bills, who provided an encore to her Division 2 championship a year ago and after helping her team Friday to its first MHSAA title since 2006.

Bills had injured a ligament in her right knee midway through the regular season and missed a month before competing again all-around for the first time at her Regional.

But she posted the highest all-around score at the Team Final, and followed that up with a 37.175 on Saturday to edge runner-up Morgan Case of Rockford (36.825).

Bills placed among the top seven on all four apparatus, finishing first in Division 2 on beam (9.575) – not bad for admitting after that there was a time she wasn’t sure she’d make it back to full speed before the season was done. 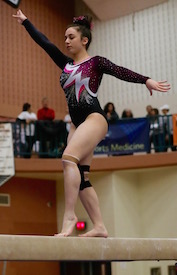 “Winning as a team was the one thing I wanted this year. This adding on top of it really made the weekend so special and an amazing way to end the season and my career in gymnastics,” said Bills, a student at North Farmington.

“I went into today as my last time competing having fun. I was kinda like, ‘It would be nice again’ – but just trying to enjoy the day, and I did. I had a blast my last time, and it really showed off.”

Conway won the Division 1 title on uneven parallel bars with a score of 9.400, and Salem senior Jordyn Williams won the floor exercise with a 9.800 – which tied two others for the MHSAA Division 1 Finals record in that event.

Case, a junior, won the Division 2 floor with a 9.600, which tied for third highest in meet history. Bills’ beam score tied for fourth-best ever at a Division 2 Final. Howell sophomore Taylor Gillespie won vault at 9.450, and Rockford junior Ashley Faulkner won bars at 9.050.