And he and the rest of Trenton’s seniors had contributed their share of memorable moments to one of the most storied programs in MHSAA history – including helping longtime coach Michael Turner become the state’s winningest at the high school level a few weeks ago.

But until Saturday, they had never been part of an MHSAA Finals championship.

Sawyer and six of his classmates closed their careers by helping Trenton to an 8-3 victory over Hartland in the Division 2 Final at Compuware Arena – and in doing so, became the 14th Trojans team to win the highest title and first since 2010.

“I grew up every day of my childhood, … looked up to every single player,” Sawyer said. “It feels amazing to finally be one of the guys I was looking up to at one point in my life.”

Turner, who upped his career record to 628-126-52 over 28 seasons, took his team in front of Trenton’s championship banners earlier this week to give them one last reminder of Saturday’s opportunity.

The Trojans (26-4-1) also received messages from past players wishing them luck with hopes they might enjoy what those past champions once experienced. Trenton trailed only Bloomfield Hills Cranbrook-Kingswood (16) in all-time hockey titles.

“It’s my best moment ever in hockey. It will be my best memory no matter what happens, whether I go on or whatever I do,” senior goaltender Nick Ramirez said. “It was amazing. And it was great to celebrate with my teammates.”

Trenton opened the weekend with a 7-0 Semifinal win over Warren DeLaSalle, then watched as Hartland – last season’s Division 2 runner-up as well – got on the board first in the Final with a goal 4:17 into the game.

But if the Trojans were worried at all, that was the last time during the 2013-14 season. 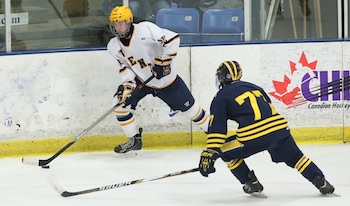 Trenton scored the next six goals, with three from senior Justin Dunn and two within 12 seconds from senior Mitchell Galea to start the third period. Turner preached to his team all tournament to attack the goal, and Saturday the Trojans took 52 shots as Hartland goalie Nick Wineka made 42 saves, fourth most in MHSAA Finals history.

The Eagles finished 20-10-1 after giving coach Rick Gadwa his third Regional title in three seasons leading the program. They fell to Trenton 5-3 earlier as part of a 1-8 skid to finish the regular season. But they battled back with four one-goal wins during the MHSAA tournament.

Wineka was one of six seniors who were part of all three Regional title teams. They led a lineup that rebuilt this winter with a young defensive corps, and leave having helped build Hartland into an elite program.

“They pulled off some things this year that flashed through my head, and I can’t believe it,” Gadwa said. “To come back this year, you’ve got high hopes, you’ve got a target on your back, and we didn’t have all that we’ve had. … Unbelievable.”

Dunn – whose older brother Cory starred for Turner and dad had him as a teacher – also had two assists for Trenton. Galea added an assist on Dunn’s first goal, and junior Philip Pugliese had one of each.

Trenton opened this season 3-3 before winning its next two games by a combined score of 22-2. Turner watched Ramirez raise his game and knew he could have another contender – a point reinforced when the Trojans finished the regular season on a 9-1 run after going 5-5 over the same stretch a year ago.

“It’s a tradition. It’s a family atmosphere down here,” Turner said. “They can now take their mark. This is one of 14, and they certainly are going to have that memory for a long, long time.”