EAST LANSING – Never underestimate the importance of defense – especially when it comes down to one final game to decide it all.

The championship was the Lancers’ second straight, making them the first to repeat at the Finals level of the tournament since Grand Rapids Christian in 2012-13.

“I always tell (my team), good teams get to the final four, great teams win it,” said Lakeshore head coach Mark Nate, whose team beat Bay City John Glenn in the 2017 title game. “That’s how we lived it last year, and we weren’t just happy to get here. Last year, we wanted to win it, and we did.

“This year, the whole talk was – for 365 days – repeat, repeat and we had a long way to go. The way we were playing in April, you would have never believed we’d be standing here now.”

Lakeshore’s game is built around pressuring its opponents by playing small ball. It worked right from the start Saturday. It didn’t take the Lancers long to take advantage of Swan Valley’s struggling defense, as they struck twice in the top of the first inning with a pair of runs on throwing errors.

Senior Sean Branch got things started with a base hit to center field. After stealing second, he moved to third on an infield single by senior Bray Plomb, then scored on an overthrow to first base. On the next play, junior Cam Dalrymple beat out a bunt to third base, and courtesy runner Ryan Soper scored on a poor throw to first, giving his team a 2-0 lead.

Lakeshore (27-14) would add two more runs in the fourth inning, again aided by the Vikings’ defense. Sophomore Oli Carmody walked to start the inning, stole second base and scored on a bunt single by Brawley when the throw to first sailed into foul territory. Brawley’s courtesy runner, junior Kyle Wojahn, would later score on a fielder’s choice by Branch to up the lead to 4-0.

“We lost four good (players) from last year, but we gained three to four good ones. And once they started learning our game, it started to click for us,” Nate said. “At the end of the day, if you stick with the plan, you can produce a lot of runs by not really even hitting the ball, (using) speed and small ball. It’s a huge part of Lakeshore baseball.”

The Lancers capped off their scoring with two runs in the fifth. Carmody walked and moved to second on a single by junior Jared Evans. Brawley then hit a grounder to short, but the throw pulled the first baseman off the bag, allowing Carmody to score. Senior Logan Morrow then drove in Evans with a bloop single to make it 6-0. 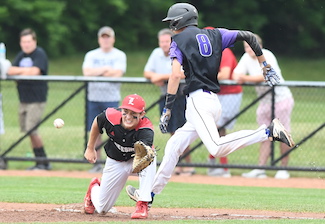 Swan Valley (33-9-3) scored a run in the bottom of the fifth inning thanks to three singles, two that didn’t leave the infield. Junior Conner Sika had a one-out single to get things started. With two outs, senior Cameron Schroeder and sophomore Brian Ross pieced together back-to-back infield hits.

Sophomore Mitchell Jebb then hit a grounder to third, but the throw pulled the first baseman off the bag, allowing Sika to score the Vikings’ first run of the game.

Swan Valley would add two more in the bottom of the seventh on a two-run double by sophomore Easton Goldensoph, which plated sophomores Victor Mancini and Brian Ross.

Brawley went 6? innings on the mound, scattering 10 hits before being pulled due to pitch count. Carmody came in and got the last out to end the game.

“There’s nothing like it, to go back-to-back,” said Brawley, whose cousin Connor pitched 7? scoreless innings Thursday, helping his team to a 3-0 shutout victory over Orchard Lake St. Mary’s in a Semifinal game. “This team has worked so hard, and we feel like we deserve it. I felt like this was just another game; that’s how you’ve got to think of it. I had to go out there and do my job and let the defense work, and good things will happen.”

Connor Brawley, Evans and Morrow each collected a pair of hits in their team’s victory.

Ross, one of eight sophomores on Swan Valley’s roster, took the loss on the mound. He pitched 3? innings, allowing six hits and three earned runs while striking out four.

“Hey, we had a great year. That’s a very good team,” Swan Valley coach Craig Leddy said. “We’re young. I know it’s tough to get back here, but we’ve got all the kids to get back here. Our No. 1 is a freshman, our No. 2 is a junior and our No. 3 is a sophomore. We’ve just got to play clean ball like we did all year. You can’t play in a championship game and make mistakes, and we made mistakes.”

VIDEO: Logan Morrow had two hits, including this RBI single in the fifth inning for Stevensville Lakeshore.