In 1971, Jennifer Bradley, a 17-year-old senior at New Buffalo High School, attempted to play for the school’s varsity baseball team. Her request was rejected by the team’s coach. The story made national news.

Described as a better hitter than many boys, who could also run and field, Bradley was a player who local police chief and amateur baseball coach Dale Siebenmark felt would be an asset to any team. 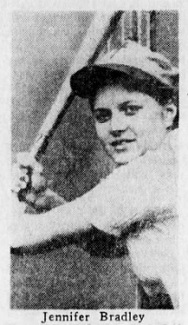 Siebenmark wrote the Michigan High School Athletic Association on her behalf, asking for clarification on her status. Bradley was told, via letter, by the MHSAA rules committee that “girls cannot engage in sports where part or all the membership of a participating team is composed of boys.”

Because she was a senior, Bradley opted not to push beyond.

“I hope in the future other girls who are interested will pursue the matter of girls trying to get on teams,” said Bradley, inadvertently foreshadowing a change that would arrive. “But, they should start when they are freshmen.”

Into this environment was born an expanding array of MHSAA state tournaments for girls.

Outside regional tournaments in alpine skiing, started during the 1953-54 school year and staged for both boys and girls, gymnastics was the first sport for females to receive a statewide MHSAA-sponsored championship tournament. It began with the 1971-72 school year – the school year prior to the signing of the United States Education Amendments, which included Title IX, in July 1972.

MHSAA golf, tennis, swimming & diving and track & field championships were added for girls during the 1972-73 school year. Basketball arrived the following year. Skiing moved to a statewide championship in February 1975.

That spring also would see the first MHSAA Finals for one of the state's fastest-growing girls sports.

According to press reports, 182 high schools in the Great Lakes State had softball teams during the 1972-73 school year. One year later, the number had jumped to 331. With the announcement of the first MHSAA-sponsored softball tournament in the spring of 1975, the total increased again to 410.

“Some of the finest facilities in the state are being used for the championships,” noted the Detroit Free Press, indicating that this was the fifth anniversary of the MHSAA title games for baseball and the first for softball. “The Class A girls softball playoffs, for instance, are being played at Lansing’s Ranney Park, a fine outstate park for 40 years.”

It was one of four separate sites used for the final rounds of softball. Class B games were hosted at Dickinson Field in Kalamazoo, Class C games were held at Manchester High School and Class D at Plangger Field in Benton Harbor. Semifinal games were scheduled at 10 a.m., noon and 12:30 p.m., with the championship contests scheduled for 3 p.m., 3:30 or 4 p.m. of the same day, depending on the site. 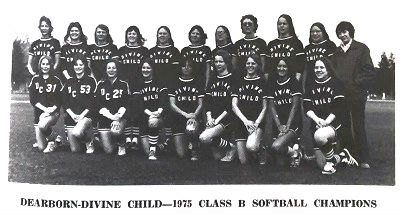 In Class A, all-around athlete Mary Kay Itnyre (who in 2015 was inducted into Michigan State University’s Athletic Hall of Fame for her stellar college basketball career) tossed back-to-back no-hit games for Redford Bishop Borgess in regional play. Itnyre, a 6-foot junior, then added a third consecutive no-hitter as the Spartans topped Bay City Central in the Semifinals, 7-0. (Bay City’s girls wore volleyball uniforms that doubled as their softball uniforms, illustrating the inequality between the boys and girls athletics that existed at the time).

“If the Detroit Tigers ever begin drafting females, pitcher Mary Kay Itnyre may be the first on the list,” wrote a United Press International writer covering that first tournament.

Later in the day, Itnyre allowed only four hits as the Borgess girls downed Portage Central, 15-3, for the title. Itnyre opened the game with three innings of no-hit ball while Borgess pounded out 12 runs, including a home run by Sue Janus in the second inning. Lori Tremonti and Itnyre each added three hits for the victors. Ann Nolan had a two-run homer for the Mustangs in the seventh. Despite the loss, the opportunity to compete for a championship game capped a 24-year physical education career for Portage Central’s Jean Smith. Long an advocate for girls sports, Smith became the school’s first softball coach with the passage of Title IX.

Dearborn Divine Child finished the 1974 season with a 6-3 record, earning the “Best Sportsmanship” trophy from the Sterling Heights Women’s Softball Association. A year later, thanks to the changes in high school athletics, they were Class B state champions.

Catcher Sheryl Tominac notched two home runs and tallied six RBI as Divine Child crushed Grand Rapids Catholic Central, 14-2, in the Semifinal. Divine Child continued the offensive assault with 13 hits in a 14-4 pounding of Tecumseh for the title. Tominac again led the Falconettes with a single in the second inning, another home run in the fourth, and a triple in the fifth inning of the championship game.

The Detroit Catholic League continued its dominance of that first tournament, as Riverview Gabriel Richard pitcher Donna Dallos held Kalamazoo Christian to a single hit, a double by Lois Talsma, in a 5-0 victory in the Class C Final at Manchester. Mary Kay Raubolt went 2 for 4 in the game with a two-run single, while Maureen Dalton went 2 for 3 with a double. Dallos, team Most Valuable Player, finished the year with a 13-2 record and an ERA of 1.50. Gabriel Richard posted a 15-2 record on the season and earned the trip to the title game with a 14-5 win over Lakeview earlier in the day. 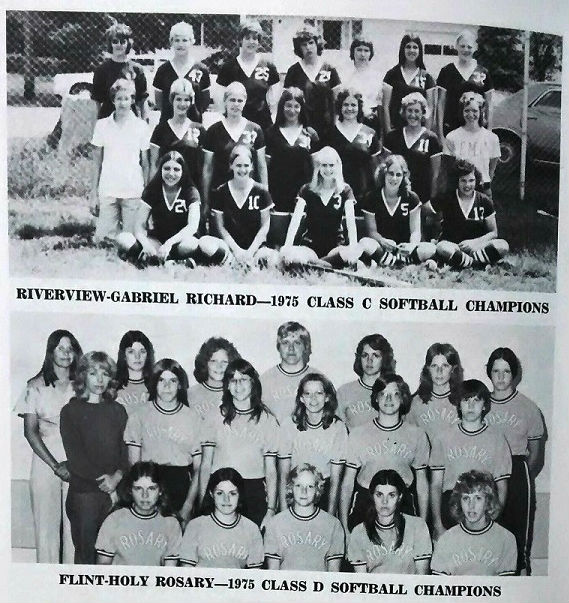 Freesoil entered the final weekend of softball competition with a flawless 35-0 record over three years of Western Michigan D League play. Trailing 9-8 in the seventh inning of the Semifinal game with Waterford Our Lady of the Lakes, the Pirates rallied for a 10-9 win and a chance at the Class D title. Their victory ensured that the Detroit Catholic League didn’t sweep the tournament.

Flint Holy Rosary entered the final inning of its Semifinal game leading 8-1 when Fowler erupted for five runs. According to Associated Press newspaper coverage, Fowler had the bases loaded with two outs when leftfielder Kelli Gerard “tossed out a runner at the plate following a bases loaded hit to nip a last inning rally,” to advance with an 8-6 victory.

In the championship game, Freesoil jumped out to a 2-1 lead behind junior Helen Shereda’s triple in the bottom of the first inning. Shereda, who pitched both the Semifinal and Final, would later become a three-sport star at Oakland University, where she earned All-America honors in basketball. Flint Holy Rosary quickly bounced back with four runs in the second inning to gain a 5-2 lead, then added three more at the top of the fifth, making it 8-2.

Freesoil bounced back with four runs in the bottom of the fifth, to pull within two, 8-6, but couldn’t grab the lead. Single runs in both the sixth and seventh innings by the Wolverines sealed the win, 10-6, and completed an incredible school year for the female athletes at Holy Rosary. Earlier, the Wolverines had won the MHSAA Class D girls basketball title, then represented Michigan in the U.S.A. Volleyball regional at Ball State University. (The MHSAA did not sponsor a volleyball state tournament until the winter of the 1975-76 school year.) The softball team included a number of athletes from the basketball and/or volleyball teams, including Gerard, Sally Lipp, catcher Patty Bentoski and pitcher Sandy Histed.

For Holy Rosary coach Anita “Jo” Lake – who had arrived as a volunteer in 1964, a year after the school’s opening – the season included yet another victory. After three operations, she had beaten breast cancer.

Since that first softball tourney, a host of other girls championship tournaments have been added by the MHSAA: Cross Country in 1979, Soccer in 1983, Competitive Cheer in 1994, Bowling in 2004 and Lacrosse in 2005.

Today, Michigan ranks 10th nationally in population, yet ranks 7th in girls and boys student participation in high school athletics. The numbers are truly impressive, especially when one considers them from the historical perspective of 45 years ago.