PINCKNEY – Dave Sontag could tell something was wrong.

The gymnasium at Petersburg-Summerfield High School is bigger than most in Monroe County. But when Sontag, a veteran official, was running up and down the floor, he felt unusually tired and began feeling pain in his back.

“I knew something was wrong,” Sontag said. “During a timeout, I told one of the other officials who was in the stands watching that he might have to finish the game.”

Sontag, however, pushed through and made it.

A few weeks later, as the Saline varsity baseball coach, Sontag was hitting fly balls to the Hornets’ outfielders.

“I was struggling,” he said. “I called the players in and told them something was wrong. I had to stop.”

Still trying to fight through whatever was wrong, Sontag was coaching third base during a Saline intra-squad scrimmage a short time later.

“I started to see white,” he said.

He had another member of the Saline coaching staff call his wife, Michelle, who came and picked him up and took him to the hospital in Chelsea.

“My blood counts were trash, just trash,” he said. “The doctors said I need to have a blood transfusion.”

He was rushed to a Detroit-area hospital for the transfusion. After tests, Sontag was diagnosed with acute lymphoblastic leukemia, an extremely vigorous, aggressive cancer. That was May 15, 2018.

During the 18 months since, Sontag has gone through chemotherapy and radiation treatments. He’s watched multiple communities respond with fundraisers and benefits and amazing support. He’s had more than one bone marrow transplant. He’s heard from countless friends and ex-players who have continued to lift his spirits day after day via e-mails and text messages. He’s been counted out more than once.

“Every day has been a challenge,” he said.

Sports and Sontag have gone together from the beginning.

He is a Monroe County native who was The Monroe Evening News Player of the Year in baseball in 1978 and went on to play at the University of Toledo. He taught journalism and English at his alma mater, Monroe Jefferson, before becoming a counselor for another 12 years. He was also the Jefferson director of athletics and recreation for a time. 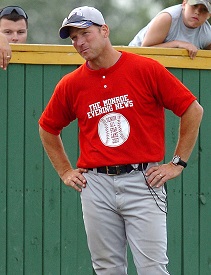 He coached baseball for the Bears, leading the team to nearly 400 victories and the Division 2 championship in 2002. He stepped down from coaching to follow his kids, who were playing at higher levels; Ryan Sontag played at Arizona State University and in the Chicago Cubs organization. Susan played softball at Bowling Green State University, and Brendan played ball at Indiana Tech University.

Still, the desire to coach never left their dad.

“After my kids were done playing, I coached freshman baseball at Jefferson,” he said. “I missed it and still wanted to be part of it.”

With his wife a principal in the Saline district, Sontag was asked by Scott Theisen, Saline’s head coach, to join his staff in 2015. He was with the Hornets when they captured the Division 1 championship in 2017, then was named head coach before the 2018 season started.

“My first varsity game ever was when I was 21,” Sontag said. “I refereed a game at Whiteford.”

Sontag previously battled non-Hodgkin’s lymphoma in 1995-1996, beating that disease after a nine-month battle.

Although this cancer battle began as he was new to the Saline community, they embraced his fight, selling “Team Tags” T-shirts and painting the youth baseball diamond with a big ribbon. His son, Ryan, was invited to throw out the first pitch before the youth baseball season started in Dave’s honor.

“I had so much support,” he said. “It was quite amazing to see.”

He tried all sorts of treatments, ultimately boarding an airplane and heading to Seattle for a clinical trial. It didn’t work.

“At that point, I didn’t think I was going to live,” Sontag said. “They told me there was nothing more they could do. They just were giving me something to take the pain away. I was miserable.”

“I felt it wasn’t time yet,” he said. “I have three grandkids. There are things I want to do. There’s so much I haven’t accomplished yet. In Seattle, they didn’t count on me living.”

But, for a still-unexplained reason, a combination of the medicine he was given to “take the pain away,” on his flight home and a different medicine he received when he returned to Michigan, started to change the way he felt. His blood counts started getting better.

“The side effects were lousy, but, for some reason, it threw me into remission. They checked for leukemia and it was not there.

“We called it a miracle.”

Sontag, who lives in Pinckney now, is still dealing with the side effects of nearly two years of treatments. He has a tingling sensation in his arms and legs – the feeling people get when their hands or feet ‘fall asleep’ – and he has a weak immune system. 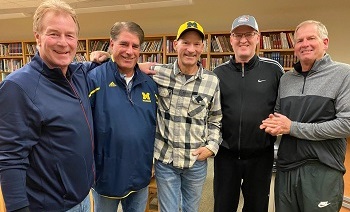 But he gets a little better every day.

“Every day is a blessing,” he said.

In addition to the community support and constant praying, he credits his wife with guiding him through this process.

“Michelle has been a rock through all of this,” he said. “She’s been by my side every single day. Without her, I don’t know if I would have made it.”

Recently, the Monroe County Officials’ Association held a banquet during which Sontag was presented with a “Courage Award.” He isn’t sure if he’ll be able to referee again anytime soon.

“I told them that night that I’d like to do it again, somewhere,” he said. “I don’t care of it’s a seventh-grade game. I just want to get out there again.”

In addition to the outpouring of love from multiple communities, family and friends, Sontag said sports has kept him alive.

“Sports is part of my fabric,” he said. “Baseball and officiating basketball games has given me that motivation I’ve needed to fight through this. I don’t know if I will coach again or referee again. I’m definitely not going to jump into the same schedule. But there are things I would like to do.

His son Ryan lives in Saline and has three children. Ryan coaches his son in a youth baseball league.

“He called me the other day and asked if I’d help him out,” Dave Sontag said. “I told him I think he will get me out there at some point.”