EAST LANSING — Monroe St. Mary Catholic Central softball fans had to wait 41 years for a glimpse of the MHSAA championship trophy, so what was a few more minutes?

The trophy was in the possession of sophomore pitcher Meghan Beaubien, who was being interviewed while the rest of her teammates were celebrating on the other side of the fence with family, friends and supporters.

No one deserved to carry the trophy off the field more than Beaubien, who took a perfect game into the seventh inning and hit a two-run homer for the game's only runs, as St. Mary won its first MHSAA title in the 41-year history of the tournament with a 2-0 victory over Bronson in the Division 3 Final on Saturday at Michigan State University.

She finished with a two-hitter, striking out 14. The Kestrels did not allow a run in seven postseason games, outscoring their opposition 29-0.

"I felt really good and focused in the postseason, which is really important," said Beaubien, who ran off the field toward St. Mary's fans with the trophy tucked under her left arm after her postgame obligations. "If there's any time to be really zoned in, it's now. It felt really good to be able to give my team the confidence that if we put up a couple runs, we had a good chance to win the game."

Beaubien was coming off her 10th no-hitter of the season in the Semifinal against Pinconning, with the only two runners reaching on errors in the third inning. She retired the final 14 batters of that game, then stretched that string to 33 batters in a row before Bronson's Kelsey Robinson reached base with one out in the seventh. The ball was bobbled at shortstop, and a single was awarded. Two batters later, Kinslea Blouin hit a clean single up the middle to give Bronson runners on first and second with two outs.

Beaubien, who verbally committed to NCAA runner-up University of Michigan before her freshman year, ended the Vikings' only threat of the game by striking out the final batter. 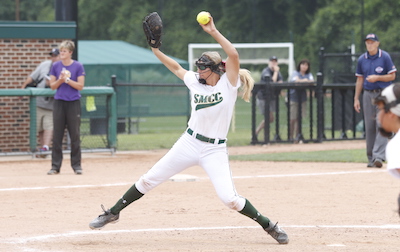 "I wasn't that worried about it," Beaubien said of the potential for only the second perfect game in MHSAA Finals history. "I just wanted to win, but I knew it was there."

In the final round of the tournament, Beaubien allowed only five hits and didn't allow a walk in 21 innings of work. She had 45 strikeouts against some of the best teams in the state.

"She did a fantastic job," first-year St. Mary coach John Morningstar said. "We knew that definitely she's going to go out and strike out quite a few hitters."

It came down to one swing of the bat — Beaubien's two-run homer in the first inning.

"I hope that (Sobeski) can let it go," Bronson coach Becky Gray said. "She'll feel like she lost the game, but that's not the case. It's unfortunate what happened today, but look what we did; it's spectacular. I cannot be disappointed, but I know there's tears."

Two of St. Mary's three hits came in the first inning, resulting in the game's only runs.

Kelsey Barron, who was 2 for 3, had a one-out single to set the stage for Beaubien. Beaubien slammed a 2-1 pitch over the fence in left-center field to give herself the only support she would need — plus an insurance run.

"I didn't know it was gone," Beaubien said. "I knew it was hit hard, but this is a pretty big field. I thought it was going to drop somewhere in the outfield. When I knew it was out, I don't know how to describe it. That was fantastic to give my team a lead in the game."

It was the second time in the playoffs that Beaubien threw a shutout and delivered her team's only runs. In a Regional championship victory over Allen Park Cabrini, her double produced the lone run in a 1-0 victory.

Sobeski responded to the long ball by retiring 13 straight batters and keeping the Kestrels off the scoreboard the rest of the game, but Bronson couldn't get anyone on base until there was one out in the seventh.

"(Beaubien) is a great pitcher," Gray said. "I thought we made some adjustments, but I think we made them a little too late. But my kids didn't give up. We didn't quit. We fought to the very last out. You can't ask for more than that."

"Everybody here knew that was the case," Morningstar said. "They've been here a few times before. We just tried to keep it very, very simple. We told them to play the game one pitch at a time. If it works out for you, it's going to be a very special thing. I don't think it's hit me just yet as far as the history for the school. It's not an easy thing to do."