Longtime coach Diane Tuller wasn’t sure at the start of this fall if these Kestrels had “what it took” to win the school’s fifth MHSAA championship and second in three seasons.

But she never told them that. Every time St. Mary stepped on the court this season, Tuller always told her players they were the best – and in the end, it proved true again.

The Kestrels dropped the first set of Saturday’s Class C Final to second-ranked Schoolcraft, 25-23, but won the next three 29-27, 25-20, 25-22, to defend their top ranking and send Tuller into retirement with one more title.

“There’s no words to describe how much it means for us to leave her with something – her last state championship, for us to be the last team she gets to coach – you’ll never find another coach like her,” St. Mary senior Cassandra Haut said, “and I know we’re all honored to be able to play for her.

“She tells us all the time we’re the best team in the state, and I think even if it wasn’t (true) she knows in our heads coming from her that means more than anything and gets us ready to play every time we step on the court.”

The Kestrels finished this fall 45-8-2, Class C champions for the third time in five seasons after making the Quarterfinals in Class B a year ago.

Tuller will retire from coaching having led St. Mary to all five of its MHSAA titles and 595 wins over 17 seasons (with 188 losses and 51 ties). 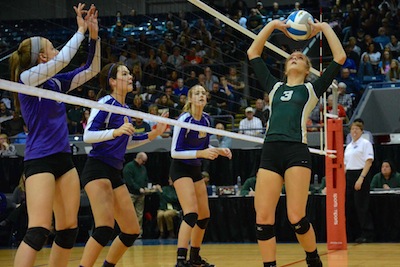 She had a great starting point for her final season in a strong senior class including Haut, a 6-foot-2 middle who was a finalist for the Miss Volleyball award and will play collegiately at Eastern Michigan University.

“They’re a great team and improved every single time they stepped on the court. That’s all I ever ask of anybody,” Tuller said. “It’s not so much the state championship that means a lot to me now, but the fact that at the beginning of the season I wasn’t sure this team had what it took to get there. They’ve been improving, working hard, doing everything I asked them. I get a little screamy sometimes, but they put up with me, worked really hard. They did it.”

St. Mary gave up only two sets in eight tournament victories – the first to Ottawa Lake Whiteford in the District opener, and the last to Schoolcraft, which led by as many as five points during the first set and also in the second and as late as 23-22 before the Kestrels came back to finish on a 7-4 run.

Haut and her teammates expected the Schoolcraft surge – the Eagles had dropped their first two Semifinal sets to Roscommon before coming back.

St. Mary never trailed in winning the third set, and came back from six down in the fourth to finish its run.

“The momentum just kept changing. We played chaotically a little bit in Game 2, and there were moments of it in Game 3,” Schoolcraft coach Erin Onken said. “But I was proud of how we did fight back, even though we had those moments.”

Haut finished with 23 kills – tied for 13th most in an MHSAA Final during the rally scoring era beginning in 2004-05 – and senior Sydney McGinn’s 48 assists tied for sixth-most in Finals history.

Senior Marianne Douglas capped her all-state career with 17 kills and 14 digs, and senior setter Sarah Wisser had 44 assists as Schoolcraft made its second championship game appearance and first since winning Class C in 2008.

The Eagles finished 46-11-1, and Onken said she expected her team to make this run. “I said if you’re going to go down, write a story, make it awesome, show people how good you are,” she added. “I think we can walk away happy; I think our fans can walk away happy.”

St. Mary’s finish seemed a little destined as well, even if that’s not quite how Tuller would describe her final team’s effort.

“I don’t know if ‘destined’ is the right word. But they were determined and disciplined in what they had to do this year,” she said. “It’s all on them.”

SCHOOLCRAFT PREVAILS IN FIRST SET - Schoolcraft made some nice defensive plays pay off for set point in the first against Monroe St. Mary Catholic Central.