EAST LANSING – None of the players on the Orchard Lake St. Mary’s roster had ever been on a Regional championship baseball team.

Most every starter returned this spring for Mount Pleasant, the defending Division 2 champion.

It was the first MHSAA baseball title for St. Mary’s (32-13) since 2003 and came against an Oilers team (27-13) that was not only defending its crown, but had outscored its opponents, 69-2, in seven MHSAA tournament games and recorded shutouts in eight of its previous nine starts.

“Our guys have competed at this stage in other sports – they haven’t been here in baseball, but they’ve competed in football and in the summer they’ve played in a lot of big games in front of a lot of people,” St. Mary’s coach Matt Petry said. “They didn’t show that it bothered them too much today.” 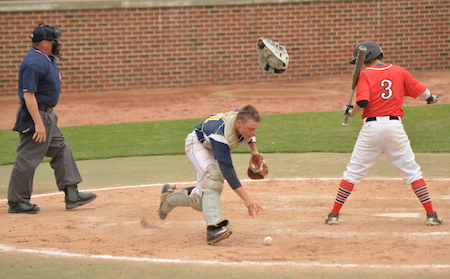 The Eaglets overcame three errors, two of which came in the top of the first inning when Mount Pleasant seized a 1-0 lead. St. Mary’s answered with the tying run in the bottom of the first on the legs of Mason Vaughn, who walked, stole second, took third on a wild pitch and scored on another wild pitch.

“That was huge. I think that set the tone for us that we were going to be around all game. If we didn’t get that run back things might have gone a different way.”

The Eaglets went ahead for good in the second inning, getting an RBI double from Joe Carlini and a run-scoring single from Drake Titus as Mount Pleasant starter Hunter Buczkowski struggled to find his control.

Buczkowski walked five, struck out five and surrendered three hits over four innings in taking the loss. Three of his walks, plus a wild pitch, came during the Eaglets’ two-run second inning.

That’s all Loukinen needed as the left-hander struck out seven and walked just one.

“He battled through some adversity there in the top of the first and he did a great job of settling down after that inning and not letting it bother him after we kicked the ball around behind him a little bit,” Petry said. “He doesn’t let too much bother him. He doesn’t walk guys. If you’re going to beat him, you’re going to have to earn it and he did a great job of keeping their guys off base via the walk. And we made some plays behind him when we needed to.”

Hunter Buczkowski led off the Oilers’ half of the seventh inning with a single and Obie Ricumstrict drew a two-out walk to bring the tying run to the plate. Loukinen struck out Zach Heeke, Mount Pleasant’s leading hitter, to end the game.

“I was just paying attention to the fact that there was another batter that I had to get out, that’s how I look at it,” Loukinen said. “I take after my teammate Drake Titus. He doesn’t let anything affect him. Regardless of the run they scored (in the first inning) I knew what I needed to do, and I had the defense to back me up.

“The past few years have been a struggle. Two years ago we made it to regionals, last year we got cut off early. There’s a lot of brotherhood on the team; everybody feels it. It was 100 percent a team win. It wasn’t just me; it was the defense, the bats, everyone on the bench.”