EAST LANSING – Something had to give in Saturday’s Division 3 Final between Monroe St. Mary Catholic Central and Napoleon.

All-state pitcher Meghan Beaubien, in 33 innings at Michigan State in Semifinal and Finals action over the last three seasons before Saturday, had allowed just four hits and no runs. Her resume included a no-hitter and a perfect game in last year’s run to the championship. As a sophomore, she threw a no-hitter on the way to the team’s first of two straight titles.

The Pirates entered this championship game after scoring 16 runs in a Semifinal victory over perennial power Gladstone. No matter what happened, they would go down swinging against Beaubien, who is University of Michigan-bound.

So what would give?

The Pirates threw the ball all over the place with seven errors, and Beaubien and the Kestrels were never in trouble after the third inning in a 13-1 clincher of their third straight Division 3 title.

Beaubien finished her high school career with 16 strikeouts against the Pirates.

“I didn’t really have a lot of goals when I first got here,’’ she said. “The bar has definitely been lifted. Each state title was different, and this one was definitely our largest margin of victory.’’

“To have done it three times is amazing,’’ said Morningstar. “Every one is special in its own unique way.’’

Things started strangely in the bottom of the first inning. After a strikeout, senior Dylan Wiley beat out an infield single. So no no-hitter.

Rachel Griffin hit a grounder that Brooklyn Barton fielded. She tagged Griffin on the first base line, but the ball popped loose. The umpired ruled Griffin safe and the Pirates had runners at first and third with just one out.

“I thought that was important because you don’t want to fall behind early,’’ said Beaubien.

Pitching prevailed as Beaubien struck out the next two hitters to end the threat. 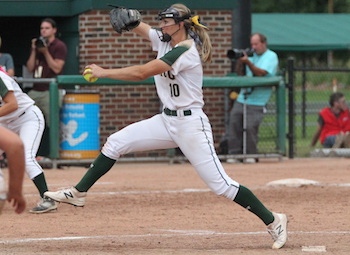 Taking advantage of two walks by teammates batting in front of her during the third inning, Beaubien sent a shot that got past the center fielder for a triple, giving herself a 2-0 lead.

An error led to Beaubien scoring from third, and the two-time reigning champs had a comfortable 3-0 lead for a pitcher who hadn’t given up a run in two previous championship game appearances.

Grace Mikesell’s two-run double blew the game open as the Kestrels built a commanding a 5-0 lead. Samantha Michael added a run-scoring single to make it 6-0 to end the scoring in the frame.

Napoleon’s lone run came in the bottom of the third inning when Dylan Wiley singled down the leftfield line and scored on a three-base error as senior catcher Kenna Garst was unable to track down a throw because she’d suffered a knee injury. It was the first run Beaubien had allowed in three appearances at MSU, and Brooke Angerer then replaced Garst behind the plate.

More errors by Napoleon led to a run in the fourth inning with Abbey Johnson scoring on a wild pitch to make it 7-1. Kelsey Barron’s triple brought in Beaubien from second base and made it 8-1, and another fielding error increased the lead to 9-1.

“I don’t know where all the errors came from,’’ said Napoleon coach Douglas Richardson. “Meghan’s a great pitcher. She throws hard. We had 19 hits yesterday and just two today.’’

Regardless, it was an incredible run for a large Pirates senior class that led the team to a 37-5 finish this season and played especially significant roles in last season’s run to the Quarterfinals and this first championship game appearance.

Wiley had both hits for Napoleon. Mikesell and Danielle Michael both had two hits and two RBI for St. Mary, following up Beaubien’s 3 for 3, three run, two RBI performance.