BATTLE CREEK – The Battle Creek St. Philip volleyball team rushed the Kellogg Arena floor Saturday just as it has many of the other 17 times the Tigers have won the MHSAA Class D championship.

There’s no reason to do differently. As the saying goes, winning doesn't graduate. And it surely doesn't get old.

Beal City made it a little tougher than some others over the years. But like in all 72 of its wins this fall, St. Philip swept the Aggies to launch the latest celebration.

The Tigers finished this season with a 25-21, 25-15, and 25-18 victory to add another to their record championship total and pull it within one more of tying the longest volleyball title winning streak in MHSAA history.

“It’s seriously the same every time. We have the same excitement every time. It’s always special. We never get tired of it,” Tigers senior setter Lenae Lesiow said. “It’s obviously the best feeling in the world.

“It’s just tradition. We really know we have so many people supporting us. And we just want to make people proud, make ourselves proud, make our coach proud.”

Every team is different, and every coach is hesitant to compare them. But this Tigers team finished 73-2-1, setting a school record for wins and ranking as the 10th-most successful volleyball team in MHSAA history.

Beal City coach Kelly David, who has been immersed in Class D volleyball as both a player and now in her first season running the program, said this was, in her opinion, the best St. Philip team to come through.

And that made how her Aggies (45-11-1) hung close even more impressive.

Beal City was playing in its first MHSAA Final in any girls sport. Only three years ago, David was the setter as the Aggies made the Semifinals but lost to the Tigers in four games.

This time, Beal City played nearly point for point through the first and halfway into the second. 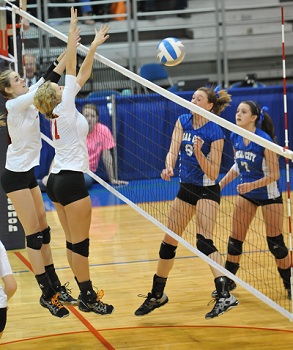 McKinzie, named Miss Volleyball on Monday, finished with 19 kills, one short of making the MHSAA Finals record book. Hubbard-Neil, a sure contender for the statewide award next season, had 18 kills

She caught fire in the second game, while McKinzie unloaded powerful finishing shots in the third.

“They were close that whole first game, and I think we were a little bit nervous knowing, ‘Wow, they are so close,’” McKinzie said.

“We just had to relax and play our game,” Hubbard-Neil added. “When either of us as a hitter starts getting going, our setter will nail us. She just starts feeding us when we’re hot.”

Kennedy and senior Monica David – the coach’s sister – were freshman call-ups for the 2009 Semifinal.

“Being freshmen, we were just part of the team and we got to cheer on our teammates,” Monica David said. “It was awesome coming back as a senior and being one of the leaders out there and being a big part of the team.”

And it couldn’t have hurt to be part of her sister’s first team as a coach.

“I lucked out having a good group of girls to start with," Kelly David said. “It’s hard to believe we’re in the Finals my first year, and it’s a lot of fun. But it’s the girls, not me. It’s the girls that got here, and I’m just excited for them.”

Groat’s program has plenty of family ties as well. With eight MHSAA championships, she’s now just one short of tying the total of her mother Sheila Guerra, her predecessor who died in 2006.

Groat found a card earlier this week that she’d gotten from her mom the year before her death. On the back was written the number “8,” and she had no idea why but thought about that over the last few days. “Maybe she knew something back then that she’s trying to tell me,” Groat said.

Another title win next season would tie Marysville’s record streak from 1997-2004. But the Tigers will have to do it with a number of new contributors.

“They’re like family to me. I watched them grow from little awkward freshmen to fine young ladies as seniors, and in June when they graduate it’s going to be a sad day because we’ve spent a lot of time together,” Groat said. “They’re part of my life forever.”