ROCKFORD – "Should have" wouldn’t have been the accurate phrase.

But losing senior Madi Myers to an ankle injury during its second rotation easily "could have" doomed Rockford/Sparta’s hopes of repeating as MHSAA gymnastics champion Friday night.

As two among a handful of the absolute elite high school gymnasts in Michigan, Myers and senior Morgan Korf led a talented and deep Rams team to last season’s title and this winter on a mostly unstoppable run that looked like it could suddenly end when Myers fell during a vault. The tumble re-injured her right ankle and ended her meet, reducing her to a moral supporter resting in a wheelchair the rest of the evening.

But Myers turned down overtures to leave immediately for a checkup at the hospital. And her teammates didn’t leave her behind.

After a brief team meeting in the school cafeteria followed by some singing and dancing to perhaps calm their nerves, Rockford/Sparta’s remaining gymnasts finished the meet with the highest balance beam score of the day and enough points to earn a second straight MHSAA team championship on their home floor.

“(We said) this can’t break us. We have to come together and be stronger as a team. You can’t let something like that ruin this day. We still have an amazing chance to do very well, (and) we did,” recalled Korf, the reigning Division 1 champion who will aim to repeat at Saturday's Individual Finals. “Our team has so much depth. We just had to all come together and do our best, and do it for the team, not for any one individual.

“I just wished she was up there with us, but I’m glad she was there supporting us still. We wanted to start and finish it with her.”

Rockford/Sparta ended with a score of 146.350 in a competitive Final that saw seven teams post at least 140 points – nearly twice as many teams as did so last season and the most since eight broke 140 in 2012. Grand Rapids Forest Hills was runner-up, posting its best finish ever with a score of 145.100, and Farmington was a close third at 144.000. 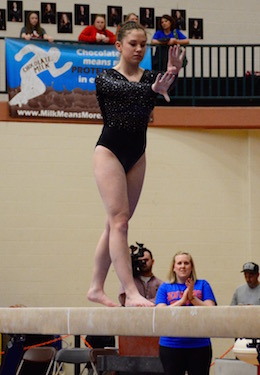 Myers – who finished ninth all-around in Division 1 last season and just ahead of Korf at their Regional last week – contributed plenty while she could. Her 9.250 on vault (before her injury) tied junior Nicole Coughlin for the team high, and her 9.475 on floor was the Rams’ best score.

But her absence for the third rotation, bars, combined with another fall by the team during that round, led the Rams to use an 8.175 to fill out their score on the event – and that overall 34.950 for the apparatus put them in danger of falling behind the other contenders.

As soon as that rotation ended, Rockford/Sparta headed into an adjoining hallway. Every gymnast took a turn talking, pepping up each other while putting that performance quickly in the past.

“Our team is so strong, and they have each others' backs every minute of every day. As soon as Madi got injured … they rallied each other and said no matter what happens, we’re not going to be defeated,” Rams first-year coach Alyssa Burke said. “It wasn’t exactly the way we planned for our day to go, but it was great. I was nervous that they were going to get down. That’s only normal when you lose one of your teammates, and they’re all so close. But they are fighters, and they have been since day one.”

With Farmington’s meet done after the 11th rotation, Forest Hills and Rockford/Sparta had one last chance to stay at the top in the 12th – Forest Hills finishing on vault and Rockford/Sparta on beam. Forest Hills shined – its 36.650 was the second-highest vault score of the day. But the Rams dominated the beam – junior Carly Coughlin scored a 9.600, while Korf came through with a 9.425, Nicole Coughlin with a 9.400 and senior Ally Case with a 9.200. Those top three scores were the second, third and fourth-highest of the entire day on that apparatus.

“I was so proud of them, I couldn’t hardly contain myself in the wheelchair. I was cheering so hard for them,” Myers said. “I just told them (before) to have no doubt in their minds, to have a kind of confidence that they’ve never had before. Just fight for every little thing, because we knew coming into it that’s what it was going to come down to, those tenths of a point.”

Despite finishing fewer than two off the pace, Forest Hills couldn’t have been happier with its runner-up finish. The team defeated Rockford/Sparta in a dual early this season, then finished second to the Rams at the Regional – but with the third-highest Regional score statewide.

In addition to posting its highest Finals place, Forest Hills also set a program record with its overall score Friday.

“It feels like first place to us,” coach Lindsay Orgeck said. “Rockford is a strong, amazing team that we get the chance to compete against more regularly than other people. So we knew they were strong. Our goal was top three, and second place feels like first.

"Our senior leaders are amazing. They set the tone for practice day one and just really have taken all the freshmen, the newbies, under their wing, and set a good example for what it looks like, what it feels like.”

Senior Christine Byam led Forest Hills with a score of 37.225, the fourth-highest all-around of Friday’s Final, and seniors Cassidy Terhorst and Hannah Esterman shined with scores of 36.275 and 36.150, respectively.

Nicole Coughlin led Rockford/Sparta with an all-around of 37.275, the third-highest of the event. Korf scored 36.750 as they were the only Rams to compete on all four apparatus – eight gymnasts total competed for the winning team.

Grand Ledge senior Rachel Hogan had the highest all-around score of 38.300. Grosse Pointe United junior Isabelle Nguyen was second with a 37.425, and Brighton senior Margo Makjian rounded out the top five also breaking 37 with a 37.200.