GRAND RAPIDS – Back in January, it didn’t look like this would be the breakthrough year for Rochester Hills Stoney Creek competitive cheer.

But the Cougars hit their stride at just the right time, overcoming a second-place conference finish by winning MHSAA District and Regional titles, then capping off their dream run with a Division 1 Finals championship Friday at the Delta Plex.

“I have a lot of different emotions right now, but the best one is knowing that our hard work over the past nine months has paid off,” said Stoney Creek senior Mandy Lilla after the emotional win in front of more than 3,000 spectators.

Stoney Creek posted the highest score from the eight-team field in all three rounds, adding up to an impressive total of 792.72 and edging neighbor and Oakland Activities Association Red rival Rochester Adams (788.90). Grandville placed third at 787.18.

The title was the second for Stoney Creek, which also won Division 1 in 2010.

The Cougars have had a solid program ever since, with a fourth-place finish last winter, but were never able to get back to the top spot until Friday night.

Tricia Williams, in her 17th season as Stoney Creek’s coach, said the maturity of this year’s team enabled the Cougars to continually improve.

“I could see this team growing week after week,” said Williams, who is assisted by Angela Gaabo. “We had a wonderful group of seniors and captains. January was not our month, but those seniors made sure that everyone stayed positive and kept tightening things up.”

The Cougars showed they were ready for business at the District with a 793.78 score, the best District total in the state. They followed that up with a Regional win and then took control of the Finals starting in Round 1.

Leading by almost four points heading into Round 3, Stoney Creek delivered a near-flawless final round performance under pressure, excelling in coordination, vocals and floor mobility, while adding many skill points with a series of stunts and lifts. In the process, the Cougars denied Grandville and Rochester Adams, the final two teams to compete in Round 3, the chance for a comeback. 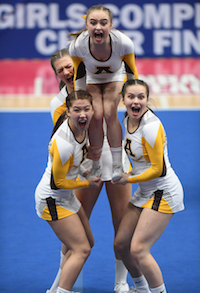 It marked the second straight year that Rochester Adams took second, after coming up just short last year to Sterling Heights Stevenson. In fact, the Highlanders finished first or second in every competition this season.

“We had an amazing season,” said Brooke Miller, in her fifth year as Adams’ coach. “Everyone is so good in our conference that it just makes us all better. We overcame a lot of things today, including an injury in Round 1, so I’m very proud of our finish.”

Stoney Creek and Adams, competitive rivals all year, shared a special moment on the mat after the trophy and medals presentations – with hugs and congratulations all around.

“So many of those girls are friends and they all work so hard, so that was great to see,” Miller said.

Williams had a brief moment alone with the championship trophy, before getting swarmed by her blue-and-gold clad team.

“It feels incredible because these girls are my second family,” said Heritage, one of four captains along with Lilla and juniors Sophia Seneker and Lindsey Zanchetta. “We went through the highs and the lows together, but we always stayed positive and supported each other.”