BATTLE CREEK — If Saginaw Swan Valley’s softball players were feeling good about themselves for reaching a second straight MHSAA championship game, the warm fuzzies quickly vanished once coach Tom Kennelly was done talking to them.

“You’re better than this!” he yelled during the team’s postgame huddle following a 5-2 Division 2 Semifinal victory over Linden on Friday at Bailey Park. “You’re not satisfied to be down here!”

Later, Kennelly spelled out “D-E-B-A-C-L-E” to describe his team’s temporary meltdown early in the game.

The message was driven home: Swan Valley shouldn’t be content just to be playing on the season’s final day, even with a young team that may get another crack next season.

The Vikings got this far last season, losing 4-0 to Livonia Ladywood in the championship game. They’ve done that on two other occasions since winning their only MHSAA crown in 1986.

“You don’t need great plays, for crying out loud, but you can’t let singles go for doubles and triples,” Kennelly said. “Mr. Sunshine, that’s what they call me.”

After taking a 2-0 lead in the bottom of the first inning, Swan Valley had two outfield errors and a walk that led to two Linden runs in the second.

The damage was minimized when junior pitcher Courtney Reinhold stranded Linden’s Alyssa Logie on third base. Logie reached third with no outs, but Reinhold induced a ground out to drawn-in third baseman Aspin Stack and struck out the next two batters.

“She’s done that in crucial situations,” Kennelly said. “I don’t know how many times she’s stranded people at third with nobody out.”

After that shaky second inning, Reinhold shut down the Eagles over the final five innings. Linden had only three more base runners, none past second base.

“I knew what I did wrong,” Reinhold said. “Pitching a girl on 0-2 something down the middle was obviously not very smart. I just cleaned up my spots and focused on what Paige (Churchfield) called back there.”

Swan Valley was the beneficiary of sloppy play by Linden in a pivotal third inning.

Three walks, two wild pitches and a hit batter led to a three-run outburst by the seventh-ranked Vikings (31-9).

Kelli Halvin and Reegan Flattery scored on wild pitches before Morgan Stadler drove in the final run of the inning with a double.

While Swan Valley is a regular participant in Battle Creek, reaching the MHSAA Semifinals is a rare treat for Linden (31-5). This is only the fourth Linden team in any sport to play in a Semifinal game, and the first girls team since the 1981 volleyball squad. The softball team hadn’t won a Regional before this season.

“It was a goal,” Linden coach Gordon Jamison said. “You always want to have high goals and expectations. I didn’t know we were going to do it. I’ve only been here four years, so it came fairly quick. It was a good group of girls, and they played together a lot.”

Swan Valley will play in the Division 2 final against unranked Tecumseh, a surprising 8-0 winner over second-ranked Ladywood. The title game is scheduled for 5:30 p.m. Saturday at Bailey Park.

Senior Emily Maves shut down reigning champion Ladywood (32-10), allowing only four hits and no walks while striking out 10. 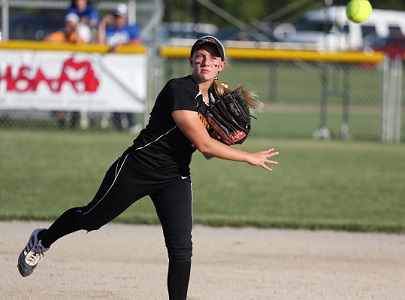 The Indians (32-5-3) got the only runs they would need on a three-run triple by senior Kylie Hill in the third inning. After taking a 4-0 lead in the fifth, Tecumseh broke open the game when a three-run homer by Kelsey Rendell highlighted a four-run sixth.

“That three-run triple was extremely huge,” Tecumseh coach Jeff Nowak said. “It took a little pressure off of Emily, and the kids kind of cruised from there.”