Jenica Sword would like nothing more than to finish her high school competitive cheer career with an MHSAA Finals championship.

If she does, she’ll probably have to defeat her grandmother.

“We have a friendly competition,” said the Addison senior. “But we definitely want to beat each other.”

Here’s the situation: Jenica competes in competitive cheer for Addison Community Schools, located just off US-127 only a few miles from the Ohio state line and in the heart of the Irish Hills area. Her mother, Jessica Sword, is the Panthers’ head coach and has been since Jenica was in kindergarten at Addison.

Jessica’s mother is Kelly Bailey, who has been the head coach of the Hudson competitive cheer team since Jessica was a high school senior there in the late 1990s.

Hudson’s not just any competitive cheer program. It’s one of the most successful in state history. In fact, Bailey has led Hudson to the Finals for 19 consecutive seasons, her team finishing runner-up in Class C-D in 2006 and in Division 4 in 2008, 2009, 2010 and 2017 before winning the title in 2018. The Tigers were back on the podium last year, finishing second behind champion Pewamo-Westphalia.

Hudson and Addison not only are both in Division 4, they are located just 10 miles apart and compete in the same MHSAA District and Regional. When the postseason begins next week, Hudson and Addison will be among the favorites at the Feb. 21 District at Vandercook Lake.

Needless to say, cheer has some deep family roots. Bailey was a sideline cheerleader in high school at Onsted, during the era before the MHSAA created competitive cheer as a sponsored tournament sport. Onsted won a statewide competition her senior year.

When her daughters were young, she got them into cheerleading.

“I cheered all the way through school,” said Sword. “I guess it goes back to Pop Warner football days. I was a cheerleader then. My mom became our coach when I was a senior in high school. As soon as I graduated, I coached middle school and the JV at Hudson. I was an assistant with my mom for seven years.

“Cheerleading is very ingrained in our family, that’s for sure.”

When Sword’s daughter started school at Addison, Sword got a teaching job at the school and was named the varsity head coach for the Panthers. One of her first objectives was to start a youth cheerleading program. Her daughter and six other members of the current Addison Panthers team were in kindergarten that year.

“They didn’t have a program at the time,” Sword said. “I began right away to implement lots of different things, like camps and performances. The girls would go out and cheer at halftime of basketball games. I wanted to build the program up from the bottom.”

While it was a work in progress then, Addison has put together a strong program. Two years ago – the year Hudson won Division 4 – the Panthers also made it to the Grand Rapids Delta Plex for the Finals, finishing sixth overall in their first-ever trip to the season’s final competition. Last February, Addison placed fifth in the Regional at Mason, just 14 points from qualifying for the Finals. Hudson was the Regional champ. 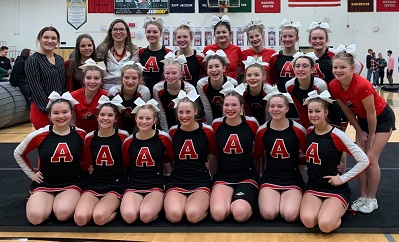 “The girls were extremely disappointed,” Sword said. “I had one of the older girls say to the team this year that she doesn’t want this year’s freshmen to ever experience that disappointment.

“These girls this year have really strong personalities, and my seniors are great leaders. They were very disappointed. A week after the season ended, they were ready to get back in there and start working.”

The Panthers have come out firing this winter, finishing first at their own invitational plus events hosted by Homer and Michigan Center. This week, Addison won the Cascades Conference championship. It was the school’s first-ever conference title in competitive cheer.

That was no easy task. To accomplish it, Addison had to dethrone Michigan Center, another traditional powerhouse in the sport.

“Michigan Center is a dynasty,” Sword said. “They’ve won every conference championship since 2006. To take that away from them was a big deal.”

The Panthers are an experienced group. Of 20 athletes on the current squad, 11 are juniors and seniors.

“They just work hard,” Sword said. “I tell them every day how talented they are, but hard work can sometimes beat talent. You’ve got to put the work in, too. This group gets it. Mentally, they come in every day and want to work hard. They want to lift and just get better. They are very focused. I can officially say this is the best group we’ve ever had at Addison.”

One of the secrets to this team’s success is the closeness among the athletes and their coach. Sword, now a professor at Adrian College, has been working with most of them since they were in grade school.

“It’s a huge part of the dynamic,” she said. “I think of these girls as my own. I’ve been a part of their lives growing up. I think they see me as a second mom as well.”

Another dynamic, of course, is the competition – Hudson.

“It can be hard,” Sword said of going up against her mother. “We don’t talk much during a meet when we compete against each other. There have been times where I want to talk to her about something but then it’s like, ‘Oh, wait, my mom is my competition.’

“She does give me some feedback. And, I always appreciate what she has to say. She knows her stuff.”

Having Jenica compete for Addison adds another dynamic to it all. The senior said she’s grown used to seeing her grandmother on the other side of the gym. No matter who the competition is, Jenica said, she and the rest of the Panthers are determined to finish strong.

“We’ve worked so hard for this. Everyone wants it,” she said. “We are all very close, like best friends. It’s much easier to lead your team when you are friends than if you are enemies.”