The Marysville volleyball program built a pair of incredible streaks at the turn of this century, one that was equaled last season – and a second that likely won’t be approached.

Battle Creek St. Philip enters this fall with a chance to break Marysville’s record of eight straight MHSAA championships won from 1997-2004 – the Tigers tied that streak by again winning Class D a year ago. But no team in MHSAA history has come within 90 wins of Marysville’s incredible 192-match winning streak from 1996 into 2000. 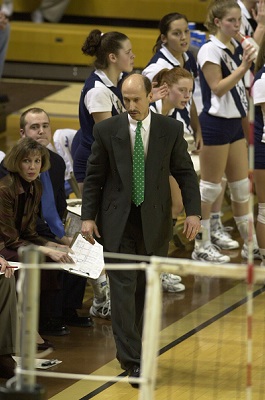 The photos above and below are from the 2000-01 Class B Final, a sweep of Fruitport 15-2, 15-9, that left the Vikings a mere 60-1 on the season after suffering that streak-breaking loss. Four players – Karen Conger with 19, Megan Harrison 15 and Kelly Thomas and Brittny Godlewski with 14 apiece – had double-digit kills in the match, and Thomas also had 22 assists. Marysville faced and defeated Fruitport in three straight Class B Finals from 2001-2003.

This summer, longtime Marysville coach John Knuth was inducted into the National High School Athletic Coaches Association Hall of Fame. He led the program from the 1983-84 season through 2007, then came back as co-coach for 2011, and finished with a record of 1,135-84-38 to rank fourth on the MHSAA coaching wins list in his sport.