Now the team’s ace and a junior, he did exactly the same Friday against Bridgman.

Some things haven’t changed since a year ago. And yet, so much is different for Schilling and the Ventures.

Many of the teammates surrounding him in the lineup last spring graduated, with his catcher Brett Sunde moving on to Western Michigan University.

But Schilling and his current crew find themselves one win away, again, from an MHSAA title – which would be their third straight if they can defeat Grandville Calvin Christian on Saturday.

“We’ve just got a great group of guys. We’re all a family here,” Schilling said. “If one guy has a bad day, the other guy is picking (him) up. We haven’t really skipped a beat. We just have to keep rolling.”

The top-ranked Ventures take on Calvin Christian at 3:30 p.m. at C.O. Brown Stadium.

And there’s a good chance Schilling could see the mound for a few more innings, if needed.

He improved to 15-0 this season by beating Bridgman, and he’s 31-0 during his varsity career. He was nearly untouchable this time, giving up three hits, walking none and striking out nine.

Schilling throws five pitches, and Bishop Foley coach Buster Sunde said his ace can throw all of them for strikes on demand.

“I can’t say enough about him,” Sunde said. “He’s got command of so many pitchers. It’s so hard even when (batters) see him the second time around. He’s not throwing the same pitches to hitters.”

Schilling also was 2-for-4 at the plate with one of the team’s six stolen bases and a run scored. Sophomore Nathaniel Grys was 2-for-4 with two RBI, and junior Austin Lukaschewski was 2-for-3.

Senior Brady Wasko was one of three Bridgman players to hit safely, and he also pitched in relief to finish the game for the Bees (26-6-1).

Junior Jamie Bristol won a competitive pitching battle, allowing only four hits and striking out six for Calvin Christian (24-3). He also had a hit and an RBI. 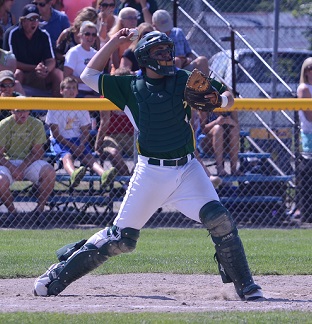 Whittemore-Prescott senior Tyler Janish also threw a complete game, but only two of the Squires’ runs were earned. Janish gave up only five hits, one walk, and he struck out seven.

Senior third baseman Josh DeYoung was 2-for-3 with two RBI for Calvin Christian, which scored three runs in the first inning and built the 5-1 advantage by the end of the second.

The Cardinals were making their first appearance in an MHSAA Semifinal. They finished this spring 24-6.

PHOTOS: (Top) A Bishop Foley batter swings through a pitch, but the Ventures found the ball enough to score five runs against Bridgman on Friday. (Middle) Calvin Christian catcher Danny Carrasco prepares to unload a throw to second base during Saturday's win over Whittemore-Prescott. (Click to see more from Hockey Weekly Action Photos.)