The Detroit Catholic Central wrestling team did not have a good first trip to CMU, losing in the Division 1 Semifinals with a team that ended up with five individual champions a week later at The Palace of Auburn Hills.

So the Shamrocks went to work in the offseason with a chip on their shoulders, and came back this year motivated.

That motivation took them all the way through the two-day tournament and winning the school's 12th team title, as the Shamrocks beat Davison, the team that knocked them out in the Semifinals last year, 35-22.

"We were frustrated last year," Detroit Catholic Central coach Mitch Hancock said. "There was a ton of motivation. We weren't happy last year. We entered as the three seed and thought we earned the one seed by beating Hartland (the eventual champions) by 16 points. But we didn't wrestle to the best of our ability against Davison, and fell short."

That wasn't the case Saturday at McGuirk, as the Shamrocks flexed their muscles against Davison throughout their lineup, including getting wins from all five of their returning individual champions.

Nicholas Jenkins scored a decision at 285 pounds, Ben Kamali won 13-7 at 112, Kevon Davenport pinned at 130 pounds, Cam Amine won by technical fall at 140 and Tyler Morland ended the dual at 171 with a pin in 30 seconds.

"Anytime you lose in the Quarterfinals or Semifinals, that leaves a bitter taste in your mouth for sure," said Morland, a senior. "We have a lot of leaders on this team, more than our seniors, and we were motivated for this year."

His team, which lost to Detroit Catholic Central earlier this winter 32-22, was hoping to find those 10 elusive points Saturday. But the strength of the Shamrocks’ lineup was too much. 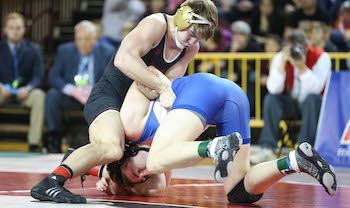 "They are so well coached," said Hall, whose team ended its year with a 26-4 record. "But I am very proud of our guys; they wrestled hard. We didn't wrestle bad, that's just a very talented team."

Davison also got big wins from Andrew Chambal at 103 and 2015 individual champ (and 2016 runner-up) A.J. Facundo at 125, but in the end, Detroit Catholic Central won eight of the 14 matches wrestled and scored more bonus points throughout the dual.

"This is absolutely remarkable," said Hancock, whose team ended its season with a 31-1 record. "We went undefeated in the state of Michigan. Our only loss was to (Lakewood) St. Ed's out of Ohio. Everybody did their job today, and we represent DCC with pride."

PHOTOS: (Top) Detroit Catholic Central wrestlers cheer on a teammate during Saturday’s Division 1 Final. (Middle) DCC and Davison competitors lock up during the Shamrocks’ win. (Click for more from HighSchoolSportsScene.com.)