Five times, his Saline Hornets had come up empty.

But Saturday, appearing in its sixth Final, Saline jumped to a 3-0 lead in the first inning and made it stand up to claim its first MHSAA baseball championship with a 5-2 victory over Northville at Michigan State’s McLane Baseball Stadium.

“It means the world, not only to me but all the other guys who have been here and gotten so close so many times,” said Theisen, who is in his 25th season at Saline and led the Hornets to Division 1 runner-up finishes in 1998, 2008-10, and 2016. “This one is in the books for everybody. It’s hard to describe how I feel.”

None was overpowering – they surrendered a combined 10 hits and Northville stranded 10 base runners – but they threw strikes and benefited from three double plays turned behind them.

“They threw OK compared to how they’ve thrown all year,” Theisen said. “It’s a tough situation out there with the stakes so high and the zone was moving and it was tight at times. They just kept working and kept pumping strikes and didn’t let the wheels fall off.” 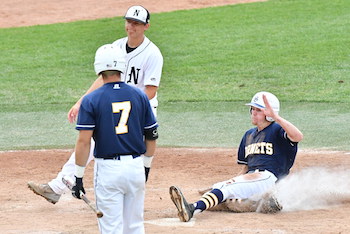 The Hornets (39-3) loaded the bases in the first inning with a single, a walk and a bunt. Two runs were forced in by walks, and Huang hit a sacrifice fly for a 3-0 lead.

Ryan Foley led off the Saline second inning with a double, stole third and scored on a wild pitch to extend the lead to 4-0. He finished with three hits including two doubles.

“We’ve been working so hard for this state title,” said Foley, a senior outfielder and one of seven starters who returned from the Hornets squad that fell, 7-6, in  the 2016 title game to Warren DeLaSalle. “To get one for coach T, it means so much to this community. Even when we were 8 or 9 years old, we had a goal and that was to get a state title at the high school level.

“We came up short last year, and that crushed us. We kept our composure (this year) and I think it helped having had so many guys who played in the state title game (last year).”

Kiyabu, who relieved Weidmayer, picked up the victory. Zmich worked the final two innings for the save, entering with two on and none out in the sixth inning and inducing two groundballs, one of which went for a double play.

It was the first Finals appearance for Northville, which got three hits from Aram Shahrigian and two each from Nick Prystash and Alex Garbacik.

“I think ultimately it was the first inning, nerves and jitters, and the double plays we hit into,” Northville coach Mike Kostrzewa said. “We had 10 hits and two runs; that’s not going to happen very often. Credit them for making the plays. We had squandered opportunities, and really a bad first inning.”