But not until just before Round 3 began at the DeltaPlex – as Anderson’s fans chanted “I believe that we will win” from the stands – did she see in her teammates that they believed as well.

And only after it was announced did the Titans know for sure they had edged a close group of contenders at the top to win their second straight title.

“We knew that we had a lot to back up to because we were the state champs, and we knew that the judges were expecting a lot from us,” Farrah said. “We had to give them more than what they were expecting.

“I knew that we were just going to go out there and pour our hearts out to those judges.”

The Titans improved from third place after Round 1 to second after 2 before finishing Round 3 with 780.36 points total to edge runner-up Hartland (778.48) by a mere 1.88. Rochester Hills Stoney Creek also was in contention until the end, finishing third with 777.08 points.

A year ago, Anderson celebrated its first MHSAA cheer title. But history moved fast Friday, and by the end of the evening the Titans were celebrating becoming just the third team in Division 1/Class A history to repeat as champion.

The run is even more impressive considering the team graduated nine after last season, many of whom participated in all three rounds. But as Anderson co-coach Colette Norscia put it, “We figured it out, how to get it done.”

“A lot of hard work. We had nine freshmen, so we had a really young team this year,” co-coach Stacey Shaw added. “And it’s all about just adapting to how everyone works.”

“Lots of times, we think more of them than what they think they can do themselves,” Norscia said. “We just gotta tell them we can. Every single day. … Even today.”

The Titans – champions of the Downriver League, which sent four teams to the Finals this weekend – came into the postseason ranked No. 3 in Division 1. But they also came to Grand Rapids off their lowest finish of the winter – third at the Regional.

Top-ranked Hartland, meanwhile, hoped to follow up Anderson’s 2012 achievement with its own first championship.

By placing second, the Eagles did post their best finish ever. But despite a notably difficult Round 3 that earned the second-best score, and the top-scoring Round 2, Hartland couldn't make up enough ground this time.

However, only three of the team’s 22 athletes graduate this spring.

“We’ve worked really hard, day after day. It’s a dream come true. I couldn’t ask for better,” Hartland coach Amanda Adkins said. “(Winning the title) is always a motivator. These girls are great at pushing themselves, and they always like to set their sights high.”

But Anderson could stand in the way again in 2014. The Titans too have only three seniors.

And the 22 athletes who could return next winter shouldn’t need convincing that they can extend the championship streak to three.

“It’s so much more exciting (this year) because we have worked so hard from day one, because we knew we’d have a young team,” Farrah said.

“I think we had to convince (our younger teammates) a little bit at first. But then we got to them, and they knew they were going to do it, too.” 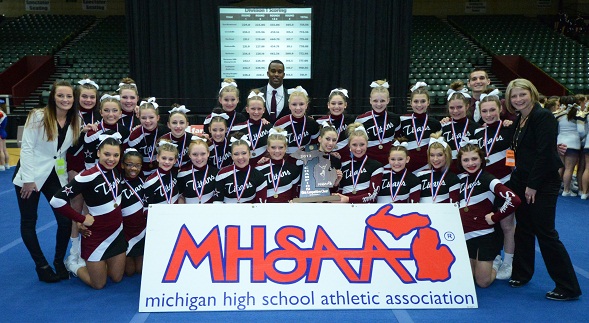