CALEDONIA – The Caledonia softball team celebrated the program’s first MHSAA championship a year ago with a 6-4 win over Hartland in the MHSAA Division 1 Final.

With 11 players from that squad back, there’s a strong belief the Fighting Scots have the potential to make a similar postseason run.

“We want to live up to what we did last year a little bit,” senior infielder Brooklynne Siewertsen said. “Everybody thinks that we’re not going to be as good because we lost our star pitcher, but we can be just as good with the pitchers we have. We just need to step up our defense a little bit and show that we belong.”

Caledonia graduated only four seniors last spring. But the headliner of that group was starting pitcher Sammie Gehrls, who’s currently playing at Grand Valley State after earning all-state honors in the circle all four years of high school and leaving with eight entries for hitting in the MHSAA record book.

“She’s only one player, but she’s tough to replace,” 18th-year Caledonia coach Tom Kaechele said. “She did so many things for us on the mound and what have you.”

The Fighting Scots, who entered the week ranked No. 7 in Division 1, have a capable stable of pitchers to fill the void but have suffered early setbacks.

Their No. 1 pitcher, junior Emallee Hamp, can’t throw right now due to an injury, while senior starting catcher Taylor Cross also is sidelined due to an injury suffered in a scrimmage.

“We’re still trying to find the right pieces,” Kaechele said. “Just playing the right pieces and having girls feel comfortable with whoever is on the mound and realizing that they have to play more defense than they did with Sammie. We’re not going to get those 10 or 12-strikeout games.”

But with the bulk of its roster having experienced last year’s success, Caledonia understands what needs to be done to play at a high level.

“We know what it’s like to play at that level, and we know what we are capable of,” Fighting Scots junior Abby Mitchell said. “We’ve already grown tremendously from our first game, and we are all ready to keep getting after it in the coming weeks.”

Added Siewertsen: “It helps tremendously to have a lot of returners because we all know what it takes to get back there (to the Finals). We have a lot of grit and determination.” 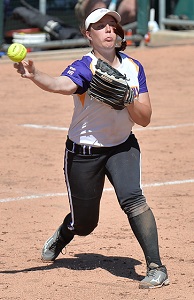 Opposing teams aren’t making it easy, and that was obvious in Monday’s 20-13 extra-inning win over Ottawa-Kent Conference Red rival Rockford.

“It’s hard because you have a target on your back and everyone wants to beat you because you are the defending state champs,” Kaechele said. “So it doesn’t matter which team it is because they are going to come out and try to give you the best they have. Rockford never gave up against us and kept coming at us and fighting.”

This year’s team has a close-knit bond and motivates each other daily.

“We all get along really well and push each other in practice and games,” Mitchell said. “We all have so much fun playing the game together, which makes the opportunity to play with these girls incredible.”

Mitchell joined Gehrls in making the all-state first team last season, and Cross earned an honorable mention. Kaechele knew he had a majority of his big bats returning to the lineup, but defense would have to be improved.

“Because of the hitting we had coming back I thought we could be very good coming into the season. But I also knew we had to play better defense, and that’s one thing we’re still trying to work on,” he said. “Just getting our defense back to where it was last year.”

The Fighting Scots are off to a 7-4 start and compete in a highly-competitive O-K Red with the likes of state powerhouses Grandville and Hudsonville, both honorable mentions in the latest Division 1 rankings.

Caledonia didn’t win the conference crown last season, but played well down the stretch en route to its historic feat.

“Once we got on a roll last year we were so dialed in as a team, and we wanted it really bad,” Kaechele said. “We have to get that mindset back and hopefully we can put it all together and get the confidence we need and get some players back that will help us.”