CANTON – Christina Shabet knew it wasn't the best thing to do during a competition. But she couldn't keep back the tears Saturday after falling off the beam for the second time.

She’d also just watched another competitor put up a great score on the apparatus, and those two together seemed to spell the end of Shabet’s pursuit of the MHSAA Division 1 championship this winter.

“I’d worked so hard, and I fell on the easiest skill I have in my routine,” Shabet said. “I was kinda devastated, and I thought, ‘Oh no, I’m not going to place at all.’

“I thought it was all over. But I went out on floor and just gave it everything.”

The Troy junior realized soon after that the competitor she'd watched do well on beam was competing in Division 2 instead. Shabet knocked out her floor routine – to go with top-seven places on bars and vault – and finished with 37.700 points to claim the all-around championship by only two tenths of a point over Coldwater senior Kylie Dudek.

Shabet didn't finish first on any apparatus. But her 9.75 on floor certainly made a huge difference, as did her 9.4 to tie for seventh on vault and 9.35 to finish fifth on bars.

Her all-around score was nearly a point higher than when she finished seventh in 2012.

“You know how you’re supposed to write down goals? I wrote it down along with my do good on the ACT thing too,” said Shabet, who then confirmed the ACT also worked out well. “I've been working so hard. It’s really nice that it pays off.” 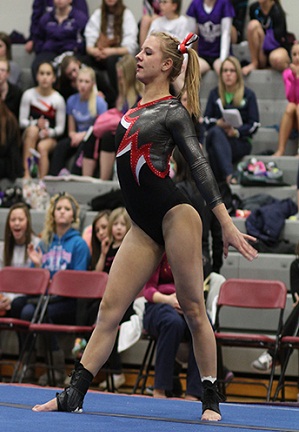 The beam doomed a number of Division 1 contenders Saturday, although Dudek was able to come back from two falls and a score of 8.6 to finish with an all-around 37.500.

“I struggled on beam … and I didn’t do the vault I normally do. But overall, I’m pretty happy,” Dudek said.

“Just having all the school records I’ve broken this year, and placing at state in the top three. That was my goal, and I did it.”

The top six placers in Division 1 all finished within 0.525 of the lead. Farmington freshman Carina Wright came in third with a 37.375 all-around score.

Four gymnasts each earned one apparatus championship in Division 1. Pinckney senior Ashley Hextall moved from up Division 2 last season to win vault with a 9.650. Canton sophomore Jocelyn Moraw had to amaze those who had also watched her during Friday’s Team Final, winning the beam with a 9.55 despite a slight limp and while competing through hamstring and back injuries. Grand Ledge’s Rachel Hogan, only a freshman, won floor with a 9.8 – which tied the Division 1 meet record for the event.

Hogan’s teammate, junior Presley Allison, claimed the Division 2 all-around championship after placing third the last two seasons. She scored a 37.875 to edge another teammate, senior Lauren Clark, by three tenths of a point. 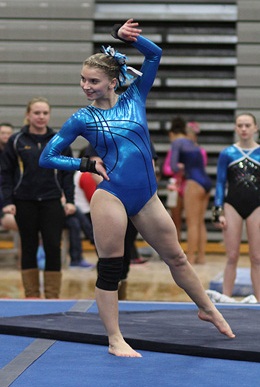 Allison took first on both floor (9.7) and beam (9.675) and tied with Canton junior Erica Lucas (9.525) for first on vault in posting the second-highest Division 2 score in Finals history (Clark’s 37.575 was the third-highest.). Allison is the third-straight Comets Division 2 champ, and like predecessors Christine Wilson and Sara Peltier, she intends to move up to Division 1 for her senior season..

“Being Division 2 champion was my ultimate goal. I just tried to keep calm and not let my nerves get to me,” Allison said.

“I really wanted to win Division 2 before I jumped up to Division 1. It gives me more confidence to go into Division 1.”

Grosse Pointe United senior Emma Abessinio – third in the all-around – won the Division 2 bars with a 9.075.