By Keith Dunlap
Special to Second Half

PLYMOUTH – Troy senior gymnast Christina Shabet paused a bit to think of an answer, which was understandable since the question required a lengthy and detailed response.

"It did a lot," Shabet said. "Having to practice every night made me focus a lot on my homework. You really don't have much of a social life as a gymnast, to be honest. It helped me focus better on my schoolwork. And playing on a team for your school, you are friends with people on your team. It was really nice to see them at school and be able to talk to them and everything."

Competing in high school gymnastics did another thing for Shabet: It provided her with two MHSAA Division 1 individual all-around championships.

After winning the all-around last year, Shabet made it a repeat Saturday at Plymouth High School, accumulating a final total of 38.675 to barely edge Grand Ledge sophomore Rachel Hogan, who was a tenth of a point behind at 38.575.

Presley Allison of Grand Ledge was third with a final score of 37.875, Jocelyn Moraw of Canton finished fourth at 37.825 and Isabelle Nguyen of Grosse Pointe United finished fifth with a score of 37.125.

Maddie Toal of Canton won the beam with a score of 9.725.

Shabet's worst event is the vault, but she still managed to finish fourth with a score of 9.525.

Hogan won the vault with a score of 9.725, but just didn't quite have enough in the end to score more than Shabet in the all-around.

"It feels really nice to come back and win again and defend my title," Shabet said. "Plus it is my senior year, and I get to finish off with a win. It was more pressure, but I practiced more and I felt pretty confident about everything, so I wasn't as nervous as I was last year."

Shabet was also better despite winning the all-around last year because she and coach Cynthia Tan made it a point to add new elements to her routine.

"We knew she was going to have a lot of girls coming after her this year," Tan said. "She already had a lot of high tricks in all of her routines. It was just a matter of adding more polish to her routine."

In her floor exercise routine, Shabet incorporated a punch front out of a one-and-a-half backflip, something she just started practicing this year.

"I was really happy I stuck that," Shabet said.

In the bars, Shabet said she has been trying to perfect a straddle back and performed it well on Saturday, which was a big reason she ended up winning that event.

With her high school career over, Shabet said she isn't sure if she will try and do gymnastics in college.

She is an honor roll student who has been accepted to the University of Michigan and is waiting to hear word on whether she will get accepted into Yale.

Shabet said if she gets accepted into Yale she will consider walking on to the gymnastics team there, but reiterated first and foremost will be schoolwork.

It goes without saying that Shabet will be nearly impossible to replace, so much so that Tan said after the meet that she will be stepping down as Troy coach.

The main reason is Tan wants to spend more time with her husband and two sons, who are 13 and 10 years old, but the end of Shabet's high school career provided an opportunity to finish with a flourish.

"We are walking out together," Tan said. "We are going out on top. ... I wanted to go out on a good note, and Christina is my good note." 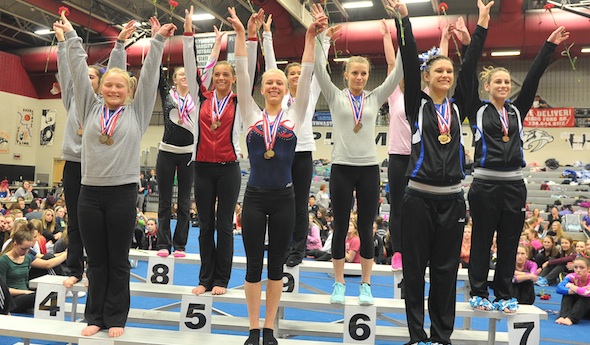 Terhorst, who tied for first in the vault and finished second in both the floor exercise and bars, didn't compete at all last year as a freshman because of a torn knee ligament.

But the nerves of competing in her first-ever MHSAA Finals weren't enough to prevent her from winning the all-around.

"It was scary having the big crowd here," Terhorst said. "I've never competed with this many people and this much pressure. But I liked the pressure."

PHOTO: (Top) The medalists from the MHSAA Division 1 Final wave to the crowd at the end of Saturday's individual competition at Plymouth High School. (Middle) The Division 2 medalists wave after receiving their awards. (Click to see more from Hockey Weekly Action Photos.)