It didn’t matter if it was driving rain, scorching heat, prom day, snowflakes, seven-game weeks, high winds, AP testing time or even a high-stakes showdown with archrival Grand Haven in the annual “Battle of the Bridge” at the end of May.

This Spring Lake girls softball team found a way to win – every game, 38 in a row and counting, to be exact.

Spring Lake coach Bill Core says that incredible consistency is what sets this team apart from any other in his 29 years at the helm.

“This is the most incredibly focused team I’ve ever had,” said Core, who hit the lofty 600-win mark for his coaching career last month. “They pay attention to detail. I think they’re on a mission.”

No. 2-ranked Spring Lake (38-0) puts its perfect season on the line against No. 6 Wayland in Saturday’s 11 a.m. opener in the MHSAA Division 2 Regional Tournament at Hope College in Holland.

The winner of that showdown will face the Comstock Park vs. Holland Christian winner in Saturday’s 3 p.m. Regional championship game.

The Lakers are led by junior ace Leah Vaughan, who sports a perfect 26-0 record, with a miniscule 0.83 ERA and 219 strikeouts in 152 innings pitched. Vaughan was sharp in Saturday’s competitive home District, striking out 10 in a 7-2 victory over neighboring rival Fruitport and then whiffing nine in a 7-1 win over Ottawa-Kent Conference Blue foe Allendale.

While Vaughan is expected to carry the load the rest of the way, Spring Lake also has a solid No. 2 pitcher in senior Lauren Somers, who has a 12-0 record and 2.41 ERA in 61 innings pitched.

On the offensive side, Spring Lake puts pressure on opponents with hitting threats throughout the lineup.

Madelyn Nelson, a senior shortstop, leads the team with a gaudy .636 batting average, 82 hits and 33 stolen bases in 33 attempts. While she certainly has college-level softball skills, Nelson will play golf at Valparaiso University in Indiana. Nelson was part of three straight Lower Peninsula Division 3 championship golf teams for Spring Lake from 2014 to 2016.

Vaughan also does her part at the plate, batting .532 with a team-high 63 RBI. Other top hitters are a pair of senior returning all-staters in second baseman Linsey Paggeot (.484 with 57 RBI) and centerfielder Lauren Hellman (.477 with 17 stolen bases in 18 attempts).

The biggest long-ball threat is junior outfielder Jenna Core, the oldest of Coach Core’s three children (and only girl), who has 10 home runs and 45 RBI. She already holds the school record with 24 home runs over her three-year varsity career, with one more season to go. Core and his wife, Tracy, also have two boys coming up in the Spring Lake system – Jackson, in 8th grade, and Jaden, 5th grade.

“Our lineup from 1 to 9 is pretty solid,” said the 55-year-old Bill Core. “That allows us to have more big innings. If you have a few good batters, you might score two or three runs, but we can keep it rolling and score six or seven.”

Spring Lake has had plenty of big innings this year, outscoring its opponents by a 424-54 margin.

The other starters for the team include junior catcher and No. 5 batter Molly Poole (.358 with 43 RBI), freshman third baseman Alicia Mumby (.410 with three home runs) and senior outfielder Kileah Rymal (.308). 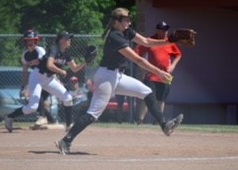 At the “core” of the Lakers’ softball success is Coach Core, the oldest of four boys who grew up in a sports-crazy family in the sports-crazy town of Traverse City.

He went on to play one year of football and four years of basketball and baseball at Alma College.

Core, who is assisted by Sarah Bulthuis and Kolbey Nelson, has turned Spring Lake into a regional power in both boys basketball and softball. Now that those programs have stocked several trophy cases with conference, District and Regional hardware, the new goal is to take the next step and get the Lakers to the “Final Four” at Michigan State University.

The Lakers’ basketball team came tantalizingly close in 2017, losing a 46-44 heartbreaker to Benton Harbor in the Class B Quarterfinals. The softball team, which has now won four consecutive District championships and 12 of the past 16 conference titles, broke through last spring with the school’s first-ever Regional championship. Spring Lake’s run was then ended in the Quarterfinals by Stevensville-Lakeshore, 6-1.

If the Lakers are able to win two more games Saturday and improve to 40-0, there is a good chance they could get a Quarterfinal rematch back at Hope College on June 12 with top-ranked Stevensville-Lakeshore.

“We returned eight starters from last year’s team, so they know how to win and they also learned what they need to do better,” explained Core. “This is the real test now. Now we’ll be in those 2-1 and 3-2 games and, hopefully, that experience will pay off for us.”