ONSTED – Rhonda Hubbard teaches physical education and science in the classroom. But, on the volleyball court, she’s become a chemistry instructor.

Her creation this fall has been mixing up a 25-0 Onsted volleyball team.

“We were all so excited for this season,” said Wildcats junior leader Mya Hiram. “We knew we had the skill and talent and were just excited to work together. It’s all about team chemistry. Our team chemistry is amazing. That is a huge part of how good things are going.”

Onsted sits atop the Lenawee County Athletic Association at 7-0 and has beaten every team except Ida at least once in league play. The Wildcats have lost just two sets all season – one to Adrian Madison in the Tecumseh Tournament and one to Mason at the Mason Invitational – in rocketing to the undefeated start. The loss to Mason came in the first set.

“We didn’t get nervous or anything,” Hiram said about the 25-19 setback. “We all just kind of came together, re-grouped and did what we had to do. It pushed us that much harder.”

The Wildcats are experienced with several contributors back from last season’s 35-16-5 team.

Hiram is one of several Onsted players who play multiple sports. She’s being recruited by dozens of college basketball teams, including some Division I programs. She also plays volleyball year-round.

“This group has played almost endlessly,” Hubbard said. “They play basketball and other sports, but they also play a lot of club volleyball. They put the time in, that’s for sure.” 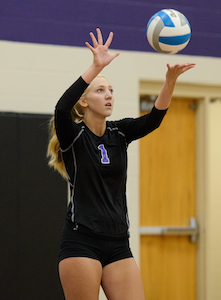 At the Mason Invitational, Wagner, Hiram and Ross all made the All-Tournament team. Hubbard said one thing that makes this group special is the opponent doesn’t know who to focus on.

“They are all very court-aware,” she said. “They move the ball well. I don’t have one go-to girl, although we could have. That makes us harder to defend because (the opponents) don’t know who’s going to get the ball.”

Hubbard is an Adrian graduate who coached the Maples freshman volleyball team 13 years before becoming the Adrian varsity head coach in 2004. This is her 10th season as the Onsted varsity volleyball coach. She also has coached track for 30 years.

“I was a sports nut,” Hubbard said about growing up. “Give me a sport and let me play it. It didn’t matter what it was. I loved the game, loved playing the game and had good mentors. I love coaching and do it because I love the kids. They keep me in it.”

Onsted has this weekend off before returning to the court Monday against Hudson. The MHSAA Tournament starts the first weekend in November. Hubbard isn’t concerned about still being undefeated.

“I think the girls understand it’s more important to be undefeated in the state tournament than the regular season,” she said.

Hiram said while the team is very aware of its record, she and her teammates aren’t resting on it or thinking too much about it.

“When we step onto the court, that doesn’t make us nervous at all,” she said. “It pushes us. We have a lot of confidence.”

“I think they are capable of going deep into the tournament,” Hubbard said. “It’s just a matter of making sure to focus and do what we are supposed to do. We can do well at the county tournament, District, Regionals … but we all know anything can happen.”

While the victories are piling up, Onsted also faces some tough competition ahead.

The Wildcats still must play LCAA opponent Ida twice, play in the Lenawee County Tournament and will take the court at the Polish Classic Invite at Bronson on Oct. 5. Niles, Sturgis, Muskegon Western Michigan Christian, Edwardsburg and Bronson also will be there. Bronson is the four-time reigning Division 3/Class C champion.

“We put that tournament on our schedule a couple of years ago because we know they are competitive teams,” Hubbard said. “You have to do that to get better. We want to play the teams that are going to push us and make us better. If we get beat, okay, it’s not the end of the world. To be unbeaten right now is awesome, but we know who we still have to play.”